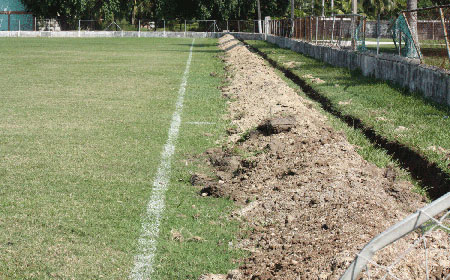 BELIZE CITY, Mon. Oct. 5, 2015–There are some strange happenings with football in Belize City.

After we have been calling for the lights to be returned to the MCC, big people decided to start digging trenches on Friday, for the laying of electrical wires for the lights.

Now, as far as Belize City fans knew, all Premier League of Belize (PLB) Opening Season 2015-2016 games were on schedule for the weekend, which means we were looking forward to BDF vs Belmopan Bandits on Sunday at the MCC.

There has been some rumbling going on recently between the PLB and the FFB, and just yesterday we confirmed from a top PLB official, that the season will be put on hold for two weeks to iron things out; the tournament will then resume on the weekend of October 24/25.  But the games for this past weekend were not supposed to be affected; or so we thought.

The PLB games report just in states that Placencia Assassins dropped Wagiya, 5-2, on Saturday night at the Michael Ashcroft Stadium in Independence.  Shaking the net for the Assassins were Alexander “Pleck” Peters (19’), Kareem Haylock (35’), Ashley Torres (41’), Delone Torres (56’) and Ashton Torres (71’); while Wagiya goals were by Eugene Martinez (64’) and Donnel Arzu (80’).  And Verdes and Police United played to a 0-0 draw at the Norman Broaster Stadium in San Ignacio yesterday, Sunday.  But what about BDF vs Bandits at the MCC also on Sunday?  The report simply said “postpone due to the condition of the pitch.”  We all know that the MCC “pitch” is a mess, but that hasn’t stopped the competition games so far.

In regards to Sports Council, we have confirmed that they have a copy of the PLB tournament schedule, so it cannot be that they didn’t know that a game was scheduled for Sunday.

Well, it seems that somebody big didn’t want that game to be played yesterday; or they wanted an excuse to cancel it.  Why else would the Ministry of Sports, through the National Sports Council, decide to start digging trenches along the sidelines at the MCC on a Friday?  Why not wait until Monday?

Meanwhile, the CYDP Peace Cup games scheduled for Saturday reportedly went ahead, despite the inconvenience.  And so did the Over-40 friendly game on Sunday, where San Pedro veterans pummeled Lilly White/Dubu Blend by a 5-0 score this time.  But for a professional encounter, the MCC was clearly inadequate.  (See picture above.)

If it was a case of the poor FC Belize club getting “the shaft” one more time, it wouldn’t be so perplexing.  But the two teams scheduled to clash on Sunday at the MCC were BDF and Belmopan Bandits, one personally owned by John Saldivar, and the other coming under the Ministry of Security, whose Minister was also the Hon. John Saldivar.  Did somebody in the Ministry of Sports want to insult Minister John?  Or did they think they were doing his team/s a favor?  We can’t rule out gross incompetence somewhere in this process; according to some reports, BDF team personnel were surprised on Sunday morning to find the trenches dug.  Whatever the case, disappointed Belize City fans were not even given the courtesy of a public announcement about the cancellation.

An announcement will reportedly be forthcoming about the new date for the BDF vs Belmopan Bandits match, which must be played before the commencement of the PLB second round of competition on October 24/25.