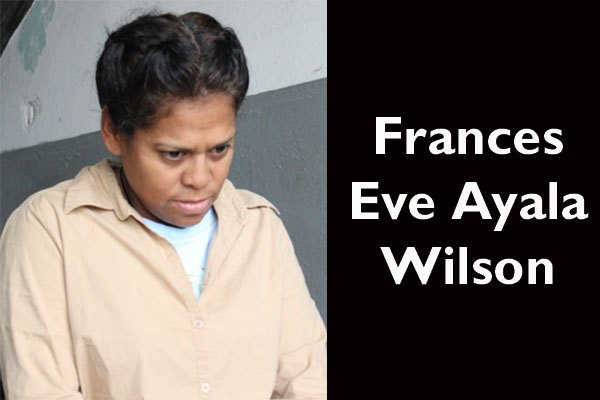 Ayala Wilson is accused of liaising with one Natisha Usher and offering her $10,000 to kill her estranged husband, Glencoe Wilson. Allegations were that she made that proposal on April 24, this year.

Glencove Wilson was informed of the attempt being made to kill him and reported the matter to police, who were able to corroborate the story with Usher. After that report was made in May by Glencoe Wilson, Ayala Wilson allegedly went into hiding and was not located until after Glencoe Wilson, against the advice of the police, posted some flyers offering a reward for her capture. Ayala Wilson was located in San Ignacio, where she was living with her father.

Ayala Wilson was represented by attorney Simeon Sampson this morning when the charge was read to her. No plea was taken from her, and that was when the prosecutor made two objections to bail.

The first objection was on the basis that once she is granted bail, there is the strong likelihood that she would not appear to answer to her charge. Cpl. Clarke pointed out to the court that although the matter was reported to police in May of this year, Wilson avoided apprehension by police by relocating from San Pedro to San Ignacio.

He also noted the seriousness of the offense and asked the court to take it into consideration under Amendment 25 of 2003 of the Crimes Control and Amendment Act, which stipulates the crimes for which bail is not offered.

In his response to the objections, Sampson volunteered that Ayala Wilson was a Belizean who was born and raised in Benque Viejo, and that if she had wanted to abscond to Guatemala, which is right in her backyard, she could have done so.

Sampson argued that the fact that the accused moved from San Pedro to San Ignacio does not necessarily indicate that she was fleeing to avoid prosecution.

He also suggested that the move by Glencoe Wilson to put up flyers with the accused’s picture printed on it was an effort to contaminate the court process.

After hearing both sides, Magistrate Hamilton decided that Ayala Wilson would be denied bail, noting that the seriousness of the crime attracts the same penalty as offenses for which bail is not offered and told the court that the matter would be more effectively handled in the higher courts.