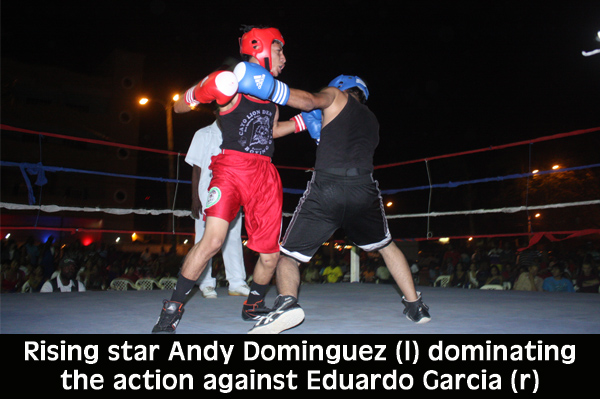 In its drive to create healthy entertainment for young people in the City, the Belize City Council, in conjunction with the Belize Boxing Federation (BBF) and the Lions Den boxing gyms in Ladyville and Cayo, provided a free card of 8 amateur bouts on Friday night, June 27, at BTL Park on Newtown Barracks.

In the opening bout, 8-year-old Jaheem Velasquez defeated 10-year-old Marvin Choto in a bout that had 3 rounds of 1.5 minutes each.

The third bout matched 14-year-olds Lindsay Young and Patrick Canelo in 3 rounds of 2 minutes each. Lindsay Young won the decision.

In the fourth bout, 13-year-old Carlos Silvero defeated 12-year-old Anzel Cu in 3 rounds of 3 minutes each.

The sixth fight was the only female match-up, and it saw a return clash between Ladyville Lions Den’s Sassani Tucker, 17 years, and Kiara Gonzalez of Cayo Lions Den, also 17 years old, in 3 x 3 minute rounds; and it was another victory for Kiara, this time a split decision over Sassani.

The eighth and final bout of the evening featured the rising star out of Cayo Lions Den gym, 17-year-old Andy Dominguez who demonstrated his impressive boxing skills in defeating Eduardo Garcia of Lions Den Ladyville by unanimous decision in 3 x 3 minute rounds.

The Cayo Lions Den gym is managed by Frank Martinez, while the Ladyville Lions Den gym is managed by Clinton Tucker. Judges on Friday night were Sulefuddin Mustafa, Raymond Flowers and Moses Sulph (BBF President). Time keeper/bell person was Orvil Velasquez, and referee was Houston Carr. MC duties for the night were shared between Kenny Morgan and Joe Bradley, and Mayor Darrell Bradley was on hand to issue the prizes to the winners.