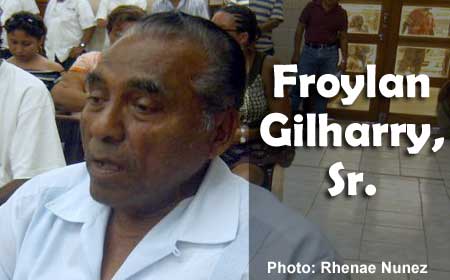 BELIZE CITY, Thurs. July 27, 2017–In a decision handed down yesterday, the Caribbean Court of Justice (CCJ) has ordered the Government of Belize to immediately make advance payment of $40,000 to former bus operator, Froylan Gilharry, Sr., of Corozal Town, towards the cost of pursuing litigation following a dispute with transport authorities over cut-backs in his runs dating back to 2011.

Amandala could not reach Gilharry for comment on the latest development, but his attorney, Fred Lumor, SC, told us that the ruling is a “Pyrrhic victory” – won at too great a cost to the victor.

Lumor noted, though, that the CCJ awarded to Gilharry costs on an indemnity basis, which means that all his legal expenses have to be paid, which, he said, is hardly ever done.

According to Lumor, he is required to submit a list of all his costs to the Solicitor General of Belize within 30 days of yesterday’s decision, and if they have concerns over the submission, they could apply to the CCJ to have the matter resolved by the court.

The CCJ ruled that Gilharry should be paid “costs incurred before all three courts on an indemnity basis…” but noted that the $40,000 should be paid forthwith.

Sources close to Gilharry told our newspaper that he is no longer in the public transportation business, and one relative told us that he has not been operating the bus service for about 5 years. He had previously been in the business for roughly four decades.

The final appellate court’s judgment was handed down by CCJ president, Sir Dennis Byron, along with Justices Saunders, Wit, Hayton and Rajnauth-Lee.

Lumor and Sheena Pitts appeared for Gilharry, while Nigel Hawke and Agassi Finnegan appeared for the respondents: the Transport Board, the Chief Transport Officer, the Ministry of Transport and the Attorney General of Belize.

A summary of the decision issued by the CCJ, said that “…the Transport Board did not properly considered the renewal of Gilharry’s application and frustrated his legitimate expectation to operate his business.”

The CCJ said that in 2008, Belize’s transport authorities sought to make policy changes in the transportation system to which some bus operators vigorously objected. A court injunction stopped the Transport Board from proceeding, but when the injunction was lifted in 2011, a move was made to restructure the sector, following consultations.

“Mr. Gilharry was offered new permits, but fewer and far less lucrative ones than he used to have. His old permits were not renewed. He decided not to pay for the new permits and did not adhere to the revised schedules that were put in place. Choosing instead to operate his old routes, he was stopped by the police and the case proceeded to court,” the CCJ summary detailed.

Gilharry lost at both the Supreme Court and the Court of Appeal, and so decided to take his case to the CCJ, where he eventually won.

The CCJ said that it strongly disagreed with the courts below that Gilharry was not entitled to a fair procedure, as he had been operating illegally, which the Court noted he could not be blamed for, and went on to say that the Transport Board should not have proceeded without giving Mr. Gilharry a proper opportunity to express his objections and concerns.

“The law and fairness required this, also because he appeared to be greatly affected by the new policy,” the court’s summary detailed.

The CCJ found that although Mr. Gilharry had suffered loss as a result of the actions of the Board, there was insufficient evidence to assess his damages, as Gilharry had failed to properly quantify or mitigate his losses.

His attorney told us, though, that initially, the case was not launched to seek damages, but to get an injunction.

He said that there is a paragraph in Gilharry’s court affidavit where he stated his gross income, the number of employees he had, wages paid and net income, and he had asked the court to remit the matter to the Supreme Court for an assessment of damages, a request they declined.

Lumor said that he will be reaching out to the government on behalf of his client to see whether they can have a discussion regarding the Gilharry decision and to see whether some form of settlement can be reached.