Of gang intervention through education 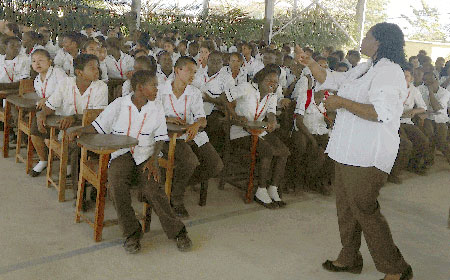 There is no need for the Belizean people at home and abroad to try to make it appear that the exploding violence presently engulfing Belize City and the surrounding villages in Belize District is not about the Belizean black youth that is in crisis. Since 1989 when Belize’s gang violence exploded, all statistics have pointed directly to the black Belizean population as being the ones annihilating themselves through gun violence.

I think it is a good thing for some Belizeans at home and abroad to be asking what can be done about the violent crime rate that has brought about a state of emergency in Belize. Belizeans at home and abroad need to understand that Belize’s gang problem was exported from abroad, from the mean streets of South Central Los Angeles and other United States cities where black Belizeans migrated and resided. It was also exported through the arrival of American television in the 1980’s through films like New Jack City and Colors.

What many Belizeans of African-descent had learned from their working and living in these U.S. cities where gang violence was prevalent was how it had been addressed by law enforcement, civil society, and education. Most of all Los Angeles became a learning zone for those Belizeans who became educators and were confronted with learning the resistance strategies to confront American students who were recruited in gangs.

Like South Central Los Angeles before it in the 1990’s, the city of Chicago has now exploded into an uncontrollable gang problem where no end appears to be in sight. And just across the shores of Central America, there were countries like Salvador, Guatemala, Mexico, Honduras, and Belize that had also caught the U.S. gang disease that exploded into a crisis of raging violence as young men, some of who were deported from the U.S., began killing each other in a senseless frenzy that was also triggered by the so-called “war on drugs.” These countries in Central America had also become transshipment points for drugs out of South America into the U.S. that continues to be a lucrative market.

It appears that the aforementioned countries’ gang problems had different origins and therefore developed different and unique ways of addressing them. How would these governments like Belize address a menace that had begun to confront them and threatened the national security of their nations? Many different strategies it appeared had been used by Belize’s law enforcement from one government to the next to arrest the crisis of gangs in Belize while there were many studies that were done to analyze the problem as a means of finding solutions as to how to eradicate or address it. One such study was the Gayle study. However, it’s 2016 and the gang problem in Belize continues to take young black lives in Belize City despite the measures employed by the present Belize government through its law enforcement.

One such measure taken by Belize’s Police Department has been community policing, and of recent its gang intervention program that has been implemented from a policing standpoint. But gang intervention should not only be the responsibility of the police, but it must also become a public health issue around violence that should be the responsibility of all of a country’s institutions if it’s to be effective and change the present course of a new generation of children growing up in what is called “predator environments” in Belize. Gang intervention most particularly has got to be addressed from an educational standpoint as well, in collaboration with Belize’s law enforcement measures that are already implemented by the Belize police on the ground.

It is known that the present Belize Ministry of Education has no gang intervention program in place that aims to train its teachers, administrators, and staff in terms of dealing with Belize’s gang problems in the schools. Programs that will train its teachers to address the issue of gangs in their classrooms, and therefore, arrest the problems before the youth is recruited or turns out to be a so-called menace to society. This is an area that the Belizean diaspora can play a significant role in and where there was a humble effort made in 2014 in the southern cities of Dangriga in the Stann Creek District and Punta Gorda in the Toledo District. An initiative that was conducted by three Belizean educators that included myself as a trained educator in gang intervention strategies in South Central Los Angeles, and two other Belizean-bred educators – Leonides Sanchez of Toledo Community College and Abdul Marin Nunez, who is also a social worker in Belize City.

We realized that the gang problem has not only permeated the whole of Belizean society but that it has spread countrywide into black population centers in the southern districts of Belize where these populations reside and are educated. So we went to the high schools and primary schools of Dangriga and Punta Gorda and held talks and conducted discussions with students, staff, and administrators about the spread of gangs in their schools. We got a very positive feedback from administrators. The problem was real and present in their schools, and they were seeing it played out among their students. They agreed that there were no gang intervention programs in which teachers and staff were being trained to address the issue from an educational standpoint, and strategies that could be implemented to arrest the problem before it exploded in their schools and therefore into the society.