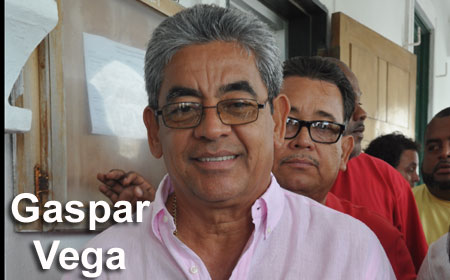 At a press conference held today, Monday, at the Best Western Belize Biltmore Plaza in Belize City, PM Barrow announced that Vega’s resignation had been accepted.

Vega is the first Cabinet Minister to resign from Cabinet since the Barrow administration took office in 2008. His resignation comes almost seven days after his son, Andre Vega, was named in a questionable land transaction in which he was reimbursed by Government with $400,000, for land for which he had paid only a pittance.

The land, which he had bought from his father’s campaign manager, who himself had bought it from Government for a pittance, was actually owned by a businessman, Carlton Russell.
However, this is not the first instance in which controversy surrounded land transactions involving the former Lands Minister’s relatives.

Following the November 2015 General Elections, Vega was stripped of the Ministry of Natural Resources and four months later, in March 2016, he resigned as the Deputy Prime Minister and Deputy Party Leader, of the UDP.

Vega then threw his support behind Belmopan’s John Saldivar, who squared off against Collet’s Patrick Faber for Vega’s former position. However, Saldivar’s bid for Deputy Prime Minister and UDP Deputy Party Leader was unsuccessful.

According to UDP insiders, Vega’s relationship with PM Barrow began spiraling downhill three years ago when the Prime Minister announced at a meeting with Belizean Americans in Los Angeles in October 2013 that the Ministry of Lands was, “a hotbed of corruption.”

In 2012, after leaked documents revealed that several of his family members had received a considerable amount of government-owned land, Vega famously told the media, “I am not a normal person in Belize.”

Vega, who has been actively involved in electoral politics for a decade, remains the UDP’s area representative for Orange Walk North, but as he had said previously, he will not be seeking re-election.