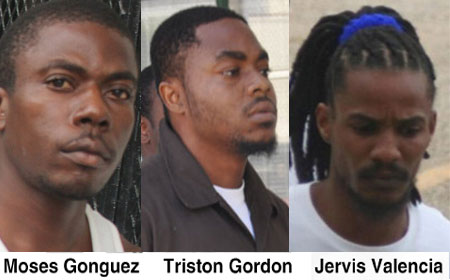 BELIZE CITY, Thurs. Mar. 5, 2015–An internal gang-related conflict that spiraled out of control last night has resulted in the death of a Sibun Street resident who was sprayed with bullets by a former friend who is now in a critical condition after being shot by police moments later.

Police reported that they shot Jervis Diamond Valencia, 32, of #5 Mayflower Street, at the corner of Mayflower and Vernon Streets at about 9:30 p.m. on March 4, 2015. He was hit in the chest and neck.

Upon making a further check at #13 Mayflower Street, investigators discovered the motionless body of Moses Ervin Gonguez, 36, of #7 Sibun Street, lying on the ground with several gunshot wounds to the head and body.

According to police, Gonguez was socializing with four friends at the said address at about 9:15 p.m. yesterday, Wednesday, when Valencia entered the yard with a handgun and fired a barrage of shots into the crowd.

Gonguez, who was shot in the forehead, arm and upper chest, died on the scene, while Triston Darrell Gordon, 23, who was also socializing with the group, suffered a gunshot wound to the left leg.

After allegedly committing the crime, Valencia ran onto Mayflower Street, at which time he was ordered to stop by police officers who had responded to the shooting.

All three men – who are all known to police – were transported to the Karl Heusner Memorial Hospital, where Valencia was admitted in a critical condition, Gonguez was pronounced dead on arrival, and Gordon was treated and later released for his injury.

Officer Commanding the Belize District Crimes Investigation Branch (CIB), Superintendent Hilberto Romero, told us today that although they have established that Valencia and Gonguez are from the same area, which is known as “Ghost Town”, which serves as the base of the reputed Ghost Town Crips, presently authorities do not have an exact motive for the wild shooting/murder.

“We are still trying to establish what led to this shooting, and why they had that conflict which led to the shooting”, Romero informed.

Romero said that mobile patrol officers who were stationed at a nearby checkpoint, which is located about 150 yards away from where the murder occurred, heard the shots that Valencia allegedly fired and immediately took up positions to see if the gunman would come in their direction, or if anyone was fleeing from where the shots were being fired.

At that time, they reportedly intercepted Valencia, who allegedly pointed a 9 millimeter pistol at them, and as a result, they responded by firing several shots in his direction, causing his injuries.

Romero mentioned that police have recovered several expended shells from near the body of Moses Gonguez and that currently, they are still trying to sort out the expended shells which were taken from the scene to find out “which firearms fired what shells”, after which the slugs will be taken to a laboratory for further analysis.

Police said that both CIB and the Professional Standards Branch of the Police Department, are investigating the incident.

In related news, more shots rang out on Lakeview Street, which is located in the same general area, sometime this morning in what might have been a retaliatory incident; however, no one was injured.