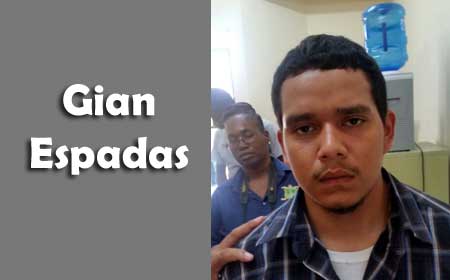 BELIZE CITY, Mon. June 26, 2017–Belize City resident, Gian Espadas, 22, who was busted with 12 pounds of cannabis at about 11:00 this morning in West Landivar, Belize City, has been taken into custody and charged with drug trafficking.

This is Espadas’ second major run-in with law enforcement personnel in just over a week. Just 8 days ago, he, along with two sons of Minister Edmond Castro, was busted in Orange Walk with 89 cases of contraband beer, valued at $6,200.

Incidentally, Espadas was released from the custody of Customs officials and police when the Castro brothers made arrangements for out-of-court settlement for the contraband goods.

Police said they were patrolling in West Landivar at about 10:45 this morning when they intercepted a car driven by Espadas. He was alone in the vehicle.

Police said that while searching the car, they found a large black plastic bag on the floor of the passenger side of the vehicle. They opened the bag and found that it contained cannabis.

Espadas, the car, and the cannabis were taken to the Queen Street Police Station, where the car was immediately impounded, Espadas was taken into custody, and the drug was deposited as an exhibit.