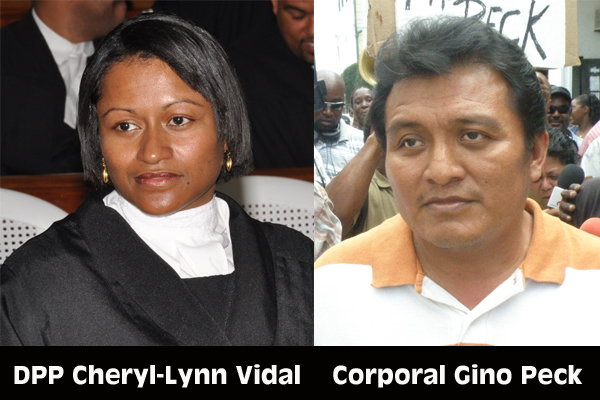 Has the DPP opened a “legal can of worms?”

The atmosphere at the Magistrate’s Court on Friday appeared surreal, as the sound of voices from an impromptu, illegal protest filtered inside the courtroom where the sentencing fate of Corporal Gino Peck, who had been found guilty of having illegal ammunition in his possession, would be determined. “Free Corporal Peck now,” the crowd chanted.

Inside the courtroom, no one in authority made any attempt to quiet the protesters, as Chief Magistrate Ann Marie Smith accepted a submission suggested to Gino Peck’s defense attorney by Director of Public Prosecutions, Cheryl-Lynn Vidal, and imposed a fine of $600 for Peck’s three ammunition convictions.

But it was the DPP’s assistance to the defense that averted the up to eight-year prison sentence that Peck’s conviction under the Fire Arms Act had mandated.

When Smith found Corporal Peck guilty on Monday, she expressed surprise that Sampson had asked for an adjournment to prepare mitigation and character witnesses.

“My hands are tied,” Smith told Sampson, meaning that the only sentence that the court could impose, under the law, was a custodial sentence, as is prescribed in the Firearms Act.

Prior to the Chief Magistrate’s imposition of the $600 fine, which she ordered to be paid forthwith, three character witnesses took the witness stand to address the court on the character of the convicted career police officer from Special Branch.

The first to address the court was the retired Reverend Oliver Ottley, from the First Church of the Nazarene, where Peck and his family attend religious services. Ottley told the court that Peck is a Christian who loves the Lord and his family and is a man of integrity who would not deliberately do anything contrary to the law he represents.

Commissioner of Police Allen Whylie, who spoke next, told the court that Peck is a police officer in good standing, whom he has known for Peck’s entire 22 years in the Police Department. Whylie said Peck is a humble man who discharges his duties, mostly at Special Branch, with professionalism. He said Peck never complained about his duties and the times it takes him away from his family.

Belize Bank Chairman, Lyndon Guiseppi, described Peck, whom he has known for five years, as a pillar in the church and the community. Giuseppe said Peck and his family embraced him when he began attending the Kings Park First Church of the Nazarene. He said Peck is a man of integrity whom he trusts and would go into battle with.

After the three character witnesses spoke, Peck’s attorney, Sampson, who apparently was still of the impression that Peck would have been sent to prison, asked the court to impose the minimum sentence and then suspend it.
Sampson added: “We at the Bar are making a constitutional motion, following these proceedings, challenging the constitutionality of these mandatory sentences.”

But before he could continue, Chief Magistrate Smith told Sampson that he should allow the sentence to be read first, and then apply for bail, pending an appeal. Smith suggested a short adjournment to allow the defense and the prosecutor to confer on what Sampson was urging the court to do.

DPP Vidal, in a move unprecedented in Belize’s legal history, then helped the man she had prosecuted and obtained a conviction against, by dropping a legal bombshell, suggesting to Sampson and Arnold that they could use Section 54 of the Summary Jurisdiction Act to enable his client to avoid going to prison.

While the court was on the short adjournment, the protesters outside, organized by the activist group Citizens Organized for Liberty through Action (COLA), maintained their animation, chanting, “Jail Penner. Free Peck.”

Among those present outside the courtroom were a number of police officers, whose plain clothes blended in with the protesters, some of whom carried their message on hastily prepared Bristol boards.
When the hearing resumed, Sampson told the Chief Magistrate that he was making the submission on the DPP’s behalf. He cited Section 54 of the Summary Jurisdiction Act.

The Chief Magistrate, after Sampson had read the section, told Peck to stand up, as she imposed the $600 fine.

Quickly, the word that Peck had been spared prison time spread outside and the protesters erupted in loud cheers, followed by chants of “People power, people power.”

A few minutes later, after the Police Department paid his fine, Corporal Peck emerged on the steps of the court building to be greeted by a cheering crowd.

When he was finally able to say a few words, Peck said, “I want to thank all the people who had come out to support me, from the bottom of my heart, including my department and my family. When you do honorable things in this world, it will always pay off in the end.”

Corporal Peck and his family were then put in a van and whisked away.

The victory that Peck’s attorney secured through the assistance of the DPP, however, will come under increasing legal scrutiny, as the decision not to impose prison time resounds through the legal fraternity of practicing criminal attorneys, some of whom are already saying, off the record, that the section of the law that was used to prevent Peck’s imprisonment does not apply to persons convicted under the Firearms Act.

Under the Firearms Act, one of the attorneys told Amandala, the Magistrate does not have the discretion to not impose the mandatory prison sentence.

In an e-mail in which she explained what transpired during the sentencing hearing, DPP Vidal explained: “I indicated to both Counsel for the defense that I had not been able to find a section that empowered the magistrate to suspend a sentence of that nature, but that I had looked at Section 54 of the SJ (P) Act and thought that it was at least arguable. I provided both with copies of the Section and we discussed its application. I informed them that I did not have a firm position on the matter, as I did not have the opportunity to properly research it.”

Vidal added: “There are many views being expressed on whether or not the Section can be invoked in this type of case, and I believe that this is an issue that will only be resolved when there are full arguments before a court. That day, I imagine, will come either at the hearing of Peck’s appeal, or if the next person convicted of such an offence ‘prays the section’ in aid.”

It is now left to be seen if the decision of Chief Magistrate Smith will be precedent-setting for future cases involving firearm and ammunition charges under the Firearms Act and, also, equally importantly, if the DPP will oppose future submissions citing Section 54 of the Summary Jurisdiction Act, which, if allowed to be used, draws the ferocious teeth of the Firearms Act, which has been used since its passing to imprison a remarkable number of ordinary Belizeans who are as innocent of criminal intentions when they were seized by police as Gino Peck is reported to have been.

One attorney remarked that “a legal can of worms has been opened with the Peck decision.”

Amandala this morning contacted the DPP, Cheryl-Lynn Vidal, to ask her why she had not previously advised the lawyers of citizens previously convicted under the Firearms Act, who were also worthy of “mercy” from the Magistrate, that this law, Section 54 of the Summary Jurisdiction Act, could have been used to free their clients from the hitherto inescapable prison term penalties outlined in the Firearms Act.
Vidal said that as an officer of the court, she was merely assisting the court, but that question would be best put to the defense attorneys. She added that her point in raising this section with the defense attorneys is that perhaps it was arguable.

The intent of the Firearms Act, which has been going through various amendments since 2002 and continued to be amended by the Barrow administration, was to introduce stiffer penalties as a counter measure to offset the increase in violent crimes committed with firearms. As mentioned earlier in our story, the Act tied magistrates’ hands by mandating a prison term for offenders. In addition to stiffer penalties, the Act removed the discretion of the magistrate to impose a fine and prescribed a mandatory custodial sentence. This was the way the law had been used since its passing.

DPP Vidal told us, however, that proceedings in the Magistrate’s Courts are governed under the Summary Jurisdiction Act, which, in fact, allows Magistrates to exercise discretion about sending an offender to prison or imposing a fine.

Even though Peck was spared from going to prison, the matter is far from over, because, apart from appealing his conviction of keeping unlicensed and prohibited ammunition, his attorney is also preparing a constitutional challenge of the mandatory prison time under the Firearms Act.

For his part, the man directly accused of being responsible for Corporal Peck’s being prosecuted, Superintendent Marco Vidal, head of the Gang Suppression Unit (GSU) and the husband of DPP Mrs. Cheryl-Lynn Vidal, sent out a press release today stating that the suggestion that the case against Peck was motivated by “some personal vendetta” was “preposterous.” In the release Vidal said that “it gives us no pleasure to charge an officer,” but “an offender is an offender whether he wears a uniform or not.”

More to the point, Vidal said that “we (the GSU) discussed this case as a unit,” and were of the view that “no useful purpose would have been served in Peck being committed to prison,” although he should face trial.