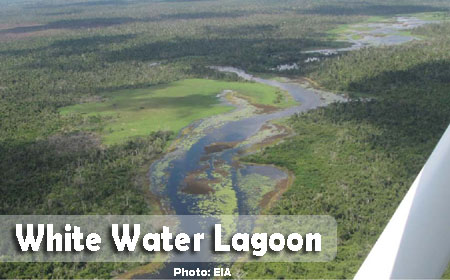 BELIZE CITY, Thurs. July 14, 2016–The Government of Belize has cited Santander Sugar, a Guatemalan company which recently started sugar production in Belize, for alleged environmental breaches, after officials had conducted assessments which they said confirmed that the company altered White Water Lagoon, which is considered a sensitive area.

Dr. Colin Young, Chief Executive Officer in the Ministry of Agriculture, Fisheries, Forestry, the Environment and Sustainable Development, told Amandala when we interviewed him on Wednesday that about 6 weeks or so ago, they received information of some alleged breaches by Santander of their Environmental Compliance Plan (ECP).

Amandala understands that the Government was alerted by civil society after it was discovered over more than a month ago.

Young said that he then sent a team to investigate, comprised of officials of the Department of the Environment, the Fisheries Department and the Forestry Department. The team, Young said, visited twice and reported that Santander had violated its ECP.

“They had dug two canals without any permission,” said Young, indicating that this was a clear violation of the ECP, which stipulates that White Water Lagoon should not be touched because of its sensitivity.

According to Young, the company also set up two dams at different parts at Whitewater Lagoon.

Young said that Santander’s actions were “a direct contravention of their ECP,” and based on the report from his staff, he ordered the company to desist from those activities—but not from their sugar production.

Young told us that the Government issued an “enforcement notice,” calling on the company to stop its breaches of the ECP and to remedy what it had done.

He maintains that, “the fact is they weren’t supposed to do that…” adding that the area is “a very sensitive ecosystem…”

Young told Amandala that the Ministry responsible for mining is also considering taking action against Santander for digging in the area without a permit.

Young told us that the company could also be liable to face penalties. The Government is putting together its case, and if the court finds against Santander, it could face a fine of $100,000—which is the maximum fine that could be imposed for an environmental breach.

Back in 2012, Green Tropics, the name under which Santander was first known in Belize, was fined the record $100,000 for cutting a canal through Belize’s Central Biological Corridor, and it was similarly ordered to rehabilitate the area.

Amandala tried to reach Beverly Burke, Santander’s spokesperson, today, but we were told that she was not in office. At press time, our call had not been returned. Our colleagues at KREM News did air an interview with Burke and she indicated that the company had built the structures on what she stressed is the company’s property, to curb flooding during rainy season. Burke said that the dams are not dams in the real sense. She said that the company had created a build-up of mud to block water that naturally drains from property to not flood adjacent property.

Young said that there is no reason to justify the company’s knowingly violating their ECP.

The company has to immediately remedy the situation by refilling the canal and removing the dams under the supervision of the Department of the Environment, Young told us.

Burke has told the press the company immediately began working with the authorities to rectify the matter after they were advised of the issue.