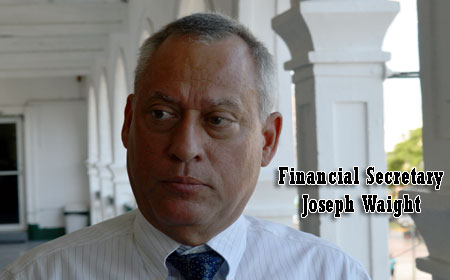 BELIZE CITY, Mon. Oct. 31, 2016–The Government of Belize has one final payment to make to the former shareholders of Belize Telemedia Limited. According to Financial Secretary Joseph Waight, roughly BZ$180 million more is outstanding, to be paid next year, in July 2017. The total compensation bill is about a half-a-billion dollars.

“The Government does not have money and will issue mostly [treasury] notes and some [treasury] bills,” Waight told the press.

Ervin Perez, Managing Director at Legacy Fund Limited, said at a luncheon held on October 20, 2016 at the Best Western Belize Biltmore Plaza today, that the Government is paying too much in interest on these treasury notes, and at the end of the day, it represents a higher cost to taxpayers, who can save several millions a year if rates reflect the current market dynamics.

We asked the Financial Secretary whether the Government can revisit the rates it pays.

He said that the Government will price the bonds according to the liquidity in the system at the time of the offering.

Waight said: “…we price at what they call a yield curve. That is, the maturity [of the notes] is one year, two year, five year, ten year – interest rates around 3%, 3.5%, 7%. Those are coming down historically. But we have to do it gradually and the problem is, if we were to offer let’s say a 1-year bond at 2%, I am not sure there will be any takers. We can try it, but I don’t think so.”

The Treasury bills are auctioned and carry much lower rates. These are short-term instruments issued for 90 days.

“We don’t have many takers at 7%. People don’t want to tie up their money for that long, even at those attractive interest rates. They would prefer shorter term maturity, because a bank would not want to tie up its money for that period of time and private investors don’t have the kind of money that the government is borrowing. Few. The government had borrowed 200 million dollars the other day. So mostly it’s the banks… in the game,” he added.

“It’s a limited market. Only a few people have that kind of money…” Waight said.

Perez, who held the finance luncheon in partnership with the Belize Chamber of Commerce and Industry (BCCI), said that increased interest cost means an increased chance that the Government will have to raise taxes to satisfy debt payments; however, he also pointed to private sector challenges which result, because less capital is available to drive private sector growth, and particularly growth of the exporting enterprises.

The adjustments in rates paid on the treasury notes could also help to steer the economy out of the mild recession, Perez suggested.