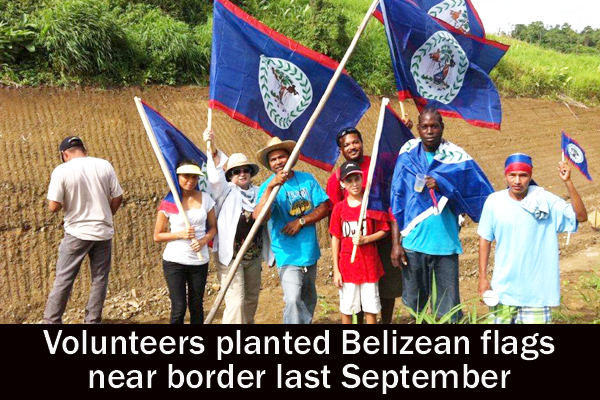 Wil Maheia, activist and leader of the Belize Territorial Volunteers (BTV), issued a press release today, Thursday, assuring the public that the Western border cleanup project is still on for Saturday, March 2, despite persistent efforts by the Government of Belize to scuttle the project, called “Clearing Our Borderline.”

During the past week, there has been strong opposition from the Minister of Foreign Affairs, Wilfred “Sedi” Elrington, who has told the media that no one knows where the border between Belize and Guatemala is, and those who participate in the project can risk being arrested by Guatemalan authorities, and can even cause an international incident.

The Guatemalan Ministry of Foreign Affairs has announced its disagreement with the BTV project through a diplomatic note to the Government of Belize.

All those acts of discouragement seemed to have been in vain, because Maheia and the BTV has not backed down. In fact, the group has exceeded its 100-persons support team aim. Maheia said that so far, they have around 200 committed volunteers, and enough machetes to accommodate that number.

Among the 200, Maheia said, are attorneys, members of the media and former security force personnel. He said that it seems that the project will be a sort of reunion for members of the Belize Defense Force, who will come with valuable experience.

“So many retired BDF [soldiers] have come forward and said that they will be a part of this,” he said. “The officers who have committed to coming have stated that they have been trained in Sandhurst, GPS reading and the different technologies, and they’ll ensure that we are on the Belize side. We feel pretty safe. We feel pretty comfortable that we will not in any way jeopardize the lives of Belizeans by going into Guatemala.”

As for protection by the Belizean security forces, Maheia said that there still has not been any formal response of whether that will happen, but all official indications are that he and his group “are on their own” when they go to the border to try to execute their project.

Maheia referred to the project as a “peaceful exercise in civic pride,” and reminded the public that the Jewel is still “recognized by the international community as a sovereign state, with its borders intact.”

For those participating in the project, BTV will have a discussion at Waluco’s Grill in Punta Gorda in the night on Friday, March 1, and a caravan will leave the PG Central Park at 6 a.m. on Saturday, March 2.

Those travelling north of Punta Gorda on Saturday are informed to make a right turn at the end of the Southern Highway and go directly to the Jalacte border, which is a straight road.