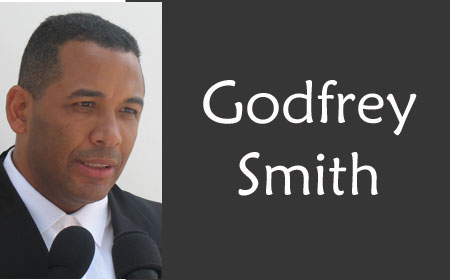 BELIZE CITY, Tues. July 14, 2015–The Opposition People’s United Party (PUP) has been staggering from defeat to defeat at the polls, and last Wednesday, the PUP lost the bi-election in Dangriga, Sarawee and Hope Creek, which was triggered by the resignation of PUP parliamentarian Ivan Ramos, and today the party’s national campaign manager, Godfrey Smith, resigned from his post.

Smith has been the PUP’s national campaign manager since April 2014, when party leader Hon. Francis Fonseca brought him into the PUP executive.

Even with Smith, a high-profile attorney with purported connections to Lord Michael Ashcroft, at the helm of the PUP’s campaign machinery, the party had failed to secure a victory at the polls in three consecutive elections.

In the March municipal elections, the PUP not only suffered a crushing defeat, but the party also lost ground in the south — where there had been PUP mayors in Dangriga and Punta Gorda, as well as several PUP town councilors, whom the voters chose to replace with UDP representatives.

On the heels of the PUP’s municipal elections defeat came a major public relations debacle when the party removed Ivan Ramos as its standard bearer for Dangriga, Sarawee and Hope Creek.

The PUP fought to hold onto the Dangriga seat from which Ramos resigned, but not even the party’s united effort was able to secure victory, as its replacement candidate, Anthony Sabal, lost by a significant margin to the UDP’s Frank “Papa” Mena.

The Dangriga loss marks the third consecutive electoral loss for the PUP since the start of this year.

Immediately after losing the Dangriga bi-election, PUP leader Francis Fonseca called a press briefing and told the nation that he would lead the PUP into the next general elections.

Fonseca also said, “I think whenever we have elections, we do a proper assessment of everything that took place. I am satisfied that the campaign manager tried. He worked hard to raise the funds that we did have and I think he believed in Mr. Sabal like we all did, and did everything that he could through his office to try and make sure that we put the best foot forward in that election.”