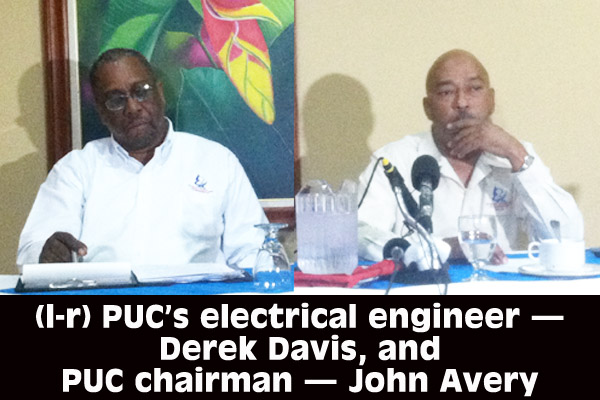 John Avery, chairman of the Public Utilities Commission (PUC), told the media at a press conference Monday afternoon that the PUC’s decision calls for total corrections of $17.7 mil in favor of consumers.

Avery said that in its submission on April 1, 2014, the Belize Electricity Limited (BEL) asked for more money to cover operational expenses, but they also proposed that the rates should be lowered to 43 cents per kilowatt hour – a reduction of about 3.7%.

The PUC chairman said that with further corrections to be paid in favor of consumers, rates are likely to decrease further down the road.

According to Avery, the 43 cents is what BEL got from applying its own methodology. He said that under the law, the PUC has the obligation and the responsibility to ensure the financial viability of the licensee – in this case BEL – and so the PUC must apply a particular method of setting rates, as stipulated in law.

Belize still relies heavily on Mexico for electricity. Derek Davis, the PUC’s Electrical Engineer, informed us that from July 2012 to June 2013, Mexico supplied 56.03% of the country’s power needs, but between July 2013 and February 2014, that figure fell to 25.71%, with the hydro operations at Mollejón, Vaca and Chalillo powering almost 64% of the country’s needs.

The change in the energy mix has meant that the unit cost of power has dropped substantially over the 7-month period, by about 32% – from 32.2 cents per kilowatt hour to 21.9 cents, some of which will be passed on to consumers within the next couple of months.

The decrease in rates would be due to corrections that the PUC would apply to existing rates, to take into account the fact that BEL collected $1.26 million more in revenues than the PUC had approved, and that the company paid $16.4 million less for cost of power than had been projected.

The PUC had also structured the tariff basket of rates so that BEL would earn $210.86 million, but BEL earned $212.13 million, so the excess is being rebated to consumers.

If BEL had collected less than the PUC had approved, the correction in rates would be in favor of BEL, Avery explained.

Whereas BEL proposed $93.3 mil in asset investments for July 2013 to June 2016, the PUC has approved $76 million. Avery said that the PUC’s decision to reduce the figure was based on BEL’s pace of making investments, and also on the fact that BEL is allowed to capitalize the interest on loans used for investments while those are under construction.

The PUC will accept comments on its initial decision until Monday, May 12. If there is a substantial objection from BEL or an interested party representing at least 10% of consumers, the PUC will engage an independent expert to conduct a review. However, if there is no objection, the initial decision becomes final.

The PUC’s initial decision may be viewed in its entirety at its office at 41 Gabourel Lane, Belize City, or on the PUC’s website at www.puc.bz.