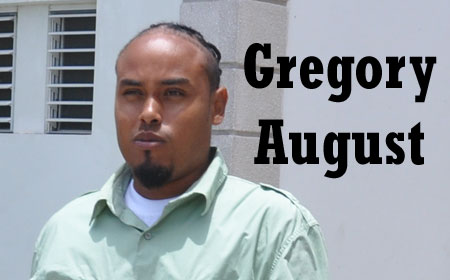 BELIZE CITY, Fri. Nov. 4, 2016–Gregory August, a convicted murderer who was sentenced to life in prison, had his sentence overturned today by the Court of Appeal, which substituted his life sentence for 30 years and also handed down a precedent-setting ruling that the mandatory life sentence for persons convicted of murder is in violation of the Belize Constitution.

Through his attorneys, however, August applied for leave to appeal to the Caribbean Court of Justice (CCJ).

From August’s application to the CCJ, the court took two issues that it said were of public interest and remitted them to the Belize Court of Appeal: the issue of the good character discretion and the issue of the constitutionality of the mandatory life in prison sentence without parole, none of which were initially argued before the court.

So in their ruling, the Court of Appeal found that the mandatory life in prison sentence for convicted murderers is in violation of Section 7 of the Belize Constitution, which provides that “no person shall be subject to torture or to inhumane punishment or treatment.”

The murder occurred on May 23, 2009 at Mile 8 on the George Price Highway, where Robinson was stabbed by August, who was along with another person when the stabbing occurred.

Robinson was physically challenged and was also blind in one eye. Robinson was stabbed a total of nine times in his home. Dr. Mario Estradabran, police pathologist, listed the cause of Robinson’s death as bronchial expiration due to multiple stab wounds to the neck and face.

There were no eyewitnesses to the murder, and the Crown had to rely on circumstantial evidence — a bloody tennis shoe and a white T-shirt — to connect August to the murder. The blood on the tennis shoe, however, was not identified as the blood of the deceased, and the trial judge provided guidance to the jury on that aspect of the Crown’s case against August.

At his sentencing hearing, Justice Adolph Lucas imposed the mandatory minimum sentence of life in prison without parole as is stipulated under Section 106 of the Criminal Code. The sentence was to take effect from May 26, 2009.

Under the Prison Rules, a convict who is sentenced to life in prison for murder is not entitled to receive parole.

In the appeal, Eamon Courtenay, SC, submitted that the life in prison sentence constitutes cruel and degrading punishment and is in violation of Section 7 of the Belize Constitution.

Courtenay also argued that the imposition of the life in prison sentence is a violation of the clause which prohibits inhumane and cruel punishment.

The “cruel and inhumane” punishment that the victim, Robinson, suffered, which cost him his life at the hands of the then 18-year-old, was not a main issue in the appeal.

The Director of Public Prosecutions argued that life in prison does not violate Section 6 and Section 7 of the Belize Constitution.

A prisoner serving a life sentence in Belize has only one recourse, and that is a remission of the sentence by the Governor General in accordance with Section 52 of the Constitution.