Groom stood up at the altar 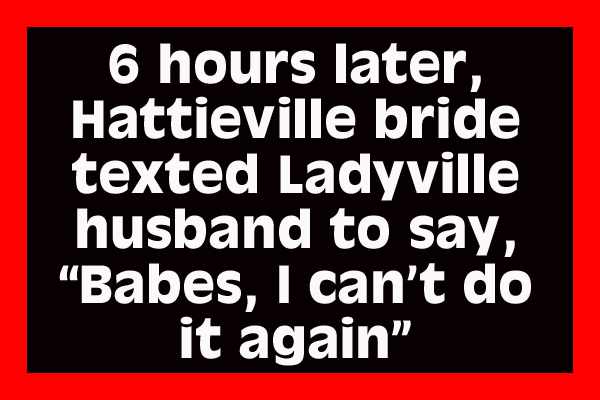 After weeks of preparation for his wedding, on Saturday, a Ladyville man was ready to exchange wedding vows with a woman with whom he has been living for three years.

But it never happened, because she left him hanging onto the promise, “I am on the way.”

At 4:00 p.m., the hour when the wedding ceremony was supposed to take place at the Ladyville Seventh Day Adventist Church, the anxious groom called his bride-to-be, and she assured him once more, “I’m on the way.”

But as the evening wore on, he became more agitated. So he called her once more.

“How far away are you,” he asked her.

But the click in his ear suggested that she had hung up the phone.

In desperation, he called again.

“I done tell you a di come,” she replied.

“I started to get cold feet, because I done figure she will not come,” the groom told Amandala.

“Even the pastor was trying to give me courage and hope. He told me that one time, he waited for seven hours for a bride to show up,” the groom said.

“Pastor Gillett also told me that this is the first wedding ceremony he would have performed where there was so much more ladies than men”, said the groom.

“We have been going out for about three years, off and on,” the groom said, “and she was the one who suggested that we get married.”

“We were living in my room and when we decided to get married, I get up and worked night and day, so that I would not have to borrow money for the wedding”, the forty-six-year-old groom who works as a food vendor and a security guard, said.

“I got everything together and she did not show up. She just left me high and dry with everybody in the church,” the spurned groom remarked.

Amandala asked him what type of communication has taken place between them since his bride failed to show up.

“This morning she texted me again, asking me, ‘what up?’” he said.

“But I never answered her text, because I done call it off,” said the man, who had gone back to the Ladyville Community Center to clean up, after his wedding reception was turned into just a party for his guests and family members.

He said that he spent around $2,000 preparing for the wedding, but has now come to realize that the 24-year-old woman who asked him to wed her was just in the relationship for what she could get out of him for herself, her family and her three children, none of whom he has fathered.