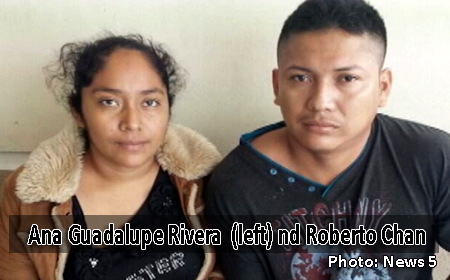 CALLA CREEK ROAD, Cayo District, Thurs. Feb. 25, 2016–Gang Suppression Unit (GSU) officers last night at about 7:00 fired into an SUV carrying a family of four. Luckily, they hit only one of the vehicle’s occupants – the driver of the vehicle, Roberto Chan, 28, of Paslow Falls, Cayo District. Besides Chan, travelling in the SUV on the Calla Creek road were his wife, Lupita, 24, and two children, one 6 years old and an infant 7 months old. Roberto, a vendor whose hand is crippled by a childhood injury, was hit in the right shoulder, but mercifully neither his wife or his children were hit.

Amandala today spoke to Ana Guadalupe Rivera, who also goes by the name Lupita “Lupe” Chan, and she told us that at about 7:00 last night while they were driving on the road she heard two gunshots and saw her husband bleeding from the shoulder. She realized that he had been shot.

Roberto stopped the vehicle, and some men came from the bushes wearing camouflage clothes. Lupita said that they appeared to be policemen in camouflage uniform. After they identified themselves as GSU, the officers took Chan from behind the steering wheel, put him in the passenger seat and drove him to the San Ignacio Hospital. After that he was taken to the Western Regional Hospital, where he has been admitted to ward, the bullet still lodged in his shoulder.

Police processed the vehicle, but nothing incriminating was found.

Lupita Chan, who is also known as Ana Rivera, said that at the time of the shooting their two children were in the back seat and could have been struck by the bullets. She said that San Ignacio police at the hospital did not know that GSU were operating in the area, because they, the GSU, came from Belize City.

A police press release dated today, Thursday, stated: “Investigations revealed that members of the Gang Suppression Unit were conducting a vehicle checkpoint in the area when the Toyota in question almost ran over a member of the team, forcing them to fire at the vehicle.”

Lupita, however, strongly rejects the police report that the GSU were conducting a road block, because, she said, they did not see any road block.

And the question remains: why did the GSU fire into the vehicle, not knowing who was in it, rather than shoot out the tires? Are they not trained for this sort of maneuver? Suppose they had killed the two children and their mother?

Roberto Chan is now recovering in the Western Regional Hospital in a serious but stable condition. The family is calling the shooting unjustified. Roberto Chan is from the family of Hob brothers who won the first La Ruta Maya canoe race in 1999.