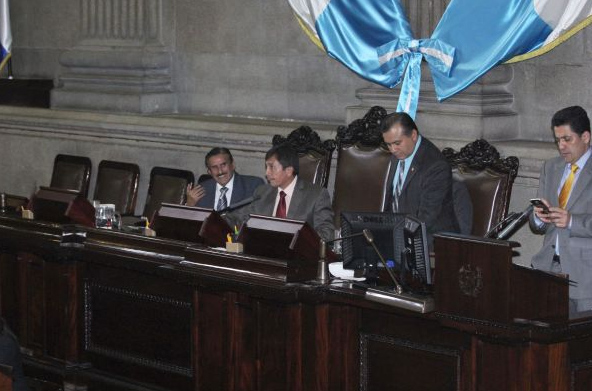 BELIZE CITY, Thurs. May 5, 2016–Guatemala’s Congress has launched a public relations offensive against Belize in a decision announced today to dissuade Guatemalans from coming to Belize, because of the “danger” seemingly posed by Belize’s military—an advisory which Belize Prime Minister Dean Barrow said “is most unfortunate and entirely unwarranted.”

With 86 votes in Guatemala’s Congress, 6 more than the required 80, that legislative body approved in a plenary session today a resolution (#7-2016), through which they are recommending that Guatemalans abstain from traveling to Belize due to the recent killing of Julio Alvarado, 13, at the hands of the Belizean military at Cebada in the Chiquibul Forest in the Cayo District.

Their Congress notified via a tweet earlier today that Lainfiesta would present a privileged motion to alter the orders of the day and make a call to Guatemalan citizens not to travel to Belize because of the “mistreatment” of Guatemalan citizens in that country.

A report published by Congress said that the Congressman demonstrated that his intent was to prevent other Guatemalans from being aggressed by Belize’s armed forces who may be encountered in the adjacency zone, an area spanning a kilometer on either side of Belize’s western border with Guatemala.

The resolution follows an incident that occurred on Wednesday, April 20, when Belize soldiers came under fire while conducting nighttime operations in the Chiquibul forest, on the Belize side of the border. Guatemala officials dispute Belize’s account, claiming that the shooting death of the minor was an act of murder and a violation of human rights. The boy’s father and younger brother were also shot but survived.

The Congress said that with its resolution, it rejects the position taken by the Government of Belize and it furthermore called on Guatemalan authorities to launch an information campaign to alert their citizens of the possibility of suffering human rights violations by the defense forces in neighboring Belize.

Asked to comment on the resolution by Guatemala’s Congress today, Belize Prime Minister Dean Barrow, speaking at a press conference to update the nation on bilateral talks between Belize and Guatemala in Washington, said that it is “more than passing strange that the Guatemalan Congress should have taken the position that it has.”

Barrow insisted that there has been progress due to this week’s talks in Washington and expressed the view that “it is the start of what we believe is going to be a negotiation exercise that can and will resolve the problems of the Sarstoon….”

Guatemala has taken the hard line position that the entire Sarstoon River is under its jurisdiction, although the 1859 boundary treaty between Britain and Guatemala documented that the boundary runs at the mid-channel of the river and south of Sarstoon Island, which Guatemala contends should not be accessed by Belizeans without its permission. Coming out of the Washington meeting, though, there is no indication that Guatemala has pulled back from that position.

Meanwhile, the Government of Belize continues to impose a ban on Belizean civilians visiting the Sarstoon “without permission” from the Government. Evidently, there is still no resolution of the problems at the Sarstoon, as Barrow is also trying to dissuade the Opposition People’s United Party from making a symbolic visit to Belize’s southern border this week.

Meanwhile, Barrow suggested that the motion by Guatemala’s Congress should not fuel skepticism over what has emerged from the meeting between Belize and Guatemala in Washington. He pointed to the communiqué issued by the Secretary General of the OAS, Luis Almagro, which, he said, was seen before its release by both Belize and Guatemala.

That communiqué, issued on Wednesday, announced that Almagro had met with the Ministers of Foreign Affairs of Belize and of Guatemala to discuss recent incidents at Belize’s western and southern borders with Guatemala.

According to the OAS statement, Almagro confirmed the imminent deployment of a group of experts to conduct an independent investigation into the circumstances surrounding the death of a Guatemala minor near the Belize-Guatemala border in April.

No specific action was announced with respect to the Sarstoon, where there continues to be reports of incursions by Guatemalans—both civilians and military. However, Almagro called on Belize and Guatemala “to adopt a cooperation mechanism as soon as possible to normalize the situation in the Sarstoon River…” and he welcomed “the readiness of both parties to advance in the negotiations of the cooperation mechanism…,” the statement added.

Finally, the OAS Secretary-General “urged the Parties to avoid future incidents such as those that have recently occurred.”

In his statement to the press on Tuesday, Prime Minister Barrow said that the whole world knows that Belize is in the right. He pointed to statements of support for Belize’s sovereignty and territorial integrity by the group of African, Caribbean and Pacific States (ACP), CARICOM, and the UK, as well as the Commonwealth Secretariat.

Guatemalan officials have taken issue with Barrow’s earlier statement, in which he said that, “All the world now knows of the unjustified, disproportionate and incendiary response of Guatemalan officialdom to the unfortunate death of their citizen….

“They know that our security personnel came under attack yet again, this time under cover of darkness, from Guatemalan civilians squarely in our territory; they know that these civilians were engaged in their continuing illegal activity which, in the Chiquibul alone, has cost this country tens of millions of dollars in plundered resources and environmental degradation; they know that the BDF [Belize Defence Force], small in number, strapped for resources and facing almost impossible odds, continues to wage a heroic struggle to protect and preserve Belizean patrimony.”

The Government of Guatemala described Barrow’s statement as a “failed attempt” to justify to the media and the international community what that country describes as “an inexcusable act” by Belize’s military, which they continue to disparage as “irresponsible” and “unprofessional.”

Barrow told the Belize media at the press conference held in Belize City today that he will not engage Guatemala’s Congress over its resolution crafted today.

Only yesterday, another member of Guatemala’s executive came out swinging against the Government of Belize. According to Prensa Libre, a leading newspaper in Guatemala, Vice President Jafeth Cabrera, then acting president, accused the Government of Belize of manipulative tactics to appear as the victims. Cabrera was incidentally speaking at an event held at the University of San Carlos, in Guatemala City, where a number of Belizeans are students. It has also been reported in the Guatemalan press that Cabrera has called for compensation for the death of the minor.

Even as Guatemala is essentially calling for its citizens to stay away from Belize, Belizeans who usually travel to that country for business have largely been staying away after tensions reached an all-time high in the wake of the Cebada shooting.

Barrow today pointed to a report indicating that the Mayor of Melchor was extremely concerned over what had happened in the immediate aftermath of the Cebada incident and the response of the Guatemalan government, which announced a mobilization of thousands of troops, including its elite special forces, the Kaibiles, to the Belize-Guatemala border.

The mayor was evidently concerned over “the drying up of the regular stream of Belizeans from Benque and elsewhere in Belize to Melchor, that it was hurting their business,” Barrow said.

After the resolution was passed by Guatemala’s Congress today, we checked a well-placed source at the western border in Benque Viejo del Carmen to find out what has been the impact of the resolution by Congress, if any. Our official source said that it is too early to tell, and the only change he has observed is the drastically reduced flow of Belizeans going over to Guatemala.

Meanwhile, hundreds of Guatemalan school children continue to commute to Belize, where they attend school at the expense of Belize’s public purse, many of them escorted by their parents. Furthermore, there are workers from Guatemala who commute to and from Belize, where they earn their living. Guatemalans also come to places like Spanish Lookout to shop for auto parts, and several others come to buy grains and cattle, along with an array of household merchandise.

Barrow pointed out that apart from the fact that Guatemalan students come across from Melchor to Belize, there are also a number of Belizean students at various universities in Guatemala, such as Universidad de San Carlos de Guatemala in Guatemala City.

“While nobody can erase the fact of what happened last weekend, the students coming across from Melchor to Benque have experienced no difference; there has been no interference in that flow, and nobody has suggested that our students attending university in Guatemala City have had any difficulty,” Barrow said.

It remains to be seen what effect the resolution by Guatemala’s Congress will have on the flow of traffic from Guatemala to Belize. We are told that very few Guatemalans come here for tourism, and the bulk of the traffic is from commuters who come for education and/or business, as well as those who have family ties on both sides of the border, who really have no fear of coming to Belize.

It also remains to be seen whether the advisory will reduce the wave of incursions into Belize and stem the pillaging of the resources in the Chiquibul Forest, and specifically the Chiquibul National Park, as well as in southern Belize, in the region of the Sarstoon-Temash National Park. These protected areas have for years been targeted for illegal farming, logging, gold panning, fishing, and other extractive activities and calls from the Government of Belize to the Government of Guatemala to “dissuade their citizens” from encroaching on Belizean territory had previously not yielded the desired results.

In fact, the death of the Guatemalan minor occurred in a zone where illegal milpa farming is routinely carried out year-in, year-out, and in that area, large acreages of Belizean forest are cut down and burned for planting, for everything from pepitos (pumpkin seeds) to marijuana.