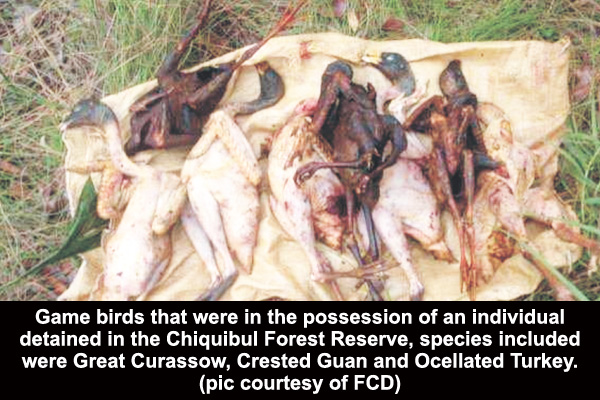 From logging to poaching, Chiquibul under pressure

Illegal foresting in the Chiquibul Forest has led to increased poaching of game species. That is what has been confirmed by research conducted through the efforts of the Friends for Conservation and Development (FCD).

The FCD issued in a press release today, Wednesday, the findings of a PACT-financed research conducted to address the effects of poaching on game species in the Chiquibul Forest area.

According to the research, which was done over a six-month period from October 2012 to March 2013, a recorded total of 1,022 creatures of 24 different species (14 species of mammals and 10 species of birds) were poached during the duration of the research.

The studies also show that the poaching is being done from the western border to the interior of the country. The hunters have been targeting larger game animals, but those species have been depleting in numbers; and smaller animals, including non-traditional game species such as the keel-billed toucan and parrots, are now being targeted.

The white-lipped peccary is known to be a favorite of the hunters for food but the research did not record any sightings of this popular game species, indicating that it has possibly become extinct in the Chiquibul Forest area.

The FCD report went on to mention that the indiscriminate hunting is not only affecting the game species, but the forest on a whole, as many game species are seed dispersers and herbivores. The decrease in the numbers of these species can significantly affect the structure and composition of the forest, the research stated.

The report stated that not all the animals are being targeted for game, but also for pelt and pet trades. According to the results of the research, illegal hunting in the Chiquibul Forest has increased over the years due to an increase of xate extraction and illegal logging. The animals were initially being hunted for food but the hunting has now become an activity for commercial trade.

Rafael Manzanero, executive director of FCD, said that all the active and abandoned camps found in the area indicate that it is the Guatemalan loggers and/or hunters who are engaging in poaching. Feathers, bones, skin and expended gunshot cartridges are often found at the camps they encounter.

The FCD is requesting that the authorities deploy more manpower in the area to alleviate the occurrences of illegal logging and poaching.

“Basically we’re trying to put more effort on the ground and working with authorities to be more effective in putting out Guatemalans from the area,” Manzanero said. “We are dealing with impacts of xate and illegal logging, and in doing that they’re engaging in hunting. If we deal with that [illegal logging], we deal with poaching.”

He told us that the fact that the poachers are operating in the interior of the country is alarming and the FCD is focusing on how they can cooperate with authorities to deal with the issue.

“One of the things we’re looking at is how do we consolidate and synchronize our efforts with authorities to be more effective,” Manzanero said.

He added that one of the challenges the organization faces is that there are minors in the jungle involved in the poaching activities.

The research was the first of its kind and Manzanero said they hope that they will be able to revisit the conditions at least every two years.