Did Guat navy chase BDF out of Sarstoon? 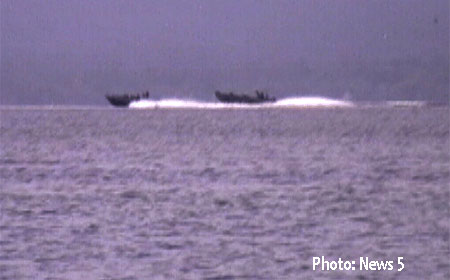 BELIZE CITY, Thurs. Aug. 27, 2015–The Belize Territorial Volunteers (BTV), in defiance of Prime Minister Dean O. Barrow’s warning not to return to Sarstoon Island a second time, did just that Tuesday morning, August 25, when Wil Maheia, the BTV founder, set out in two boats with over a dozen persons, including media representatives, to witness the changing of the BDF guard at their Cardenas observation post, accessible only through the Sarstoon River.

Last Wednesday at his prime ministerial press conference, where he was flanked by Foreign Minister Wilfred “Sedi” Elrington and National Security Minister John Saldivar, BDF Brigadier General David Jones and Coast Guard Admiral, John Borland, Prime Minister Barrow disclosed to the nation for the first time that not only has Guatemala beefed up its claim to the Sarstoon River, but “…our BDF are routinely challenged by the Guatemalans and as happened just last Tuesday, frequently told to turn back.”

General Jones, in spite of all this, contradictorily insisted that the BDF have been enjoying an “excellent relationship” with their Guatemalan counterparts, saying that the presence of the unarmed BTV in the Sarstoon will now make it difficult for his BDF soldiers.

How can unarmed, peaceful civilians travelling on Belizean land create a problem for our soldiers, is the obvious question.

The BDF general said, however, that the presence of the BTV in the Sarstoon, “…can change the status of the relationship military to military,” insisting that since the BTV has started to show their patriotism, they are now “interrupting the good relationship that we have had for decades [with the Guatemalan military].”

In the general’s view, apparently, being routinely challenged by the Guatemalans in Belizean territory equates to having a “good relationship” with the Guatemalans.

While that is the official line from the military standpoint, that view is not shared by a number of Belizeans. Activist and attorney Audrey Matura-Shepherd, who traveled with the BTV on Tuesday, told Amandala today, Thursday, “What has happened, the work of the BTV has forced government to give disclosure that their foreign policy has failed. And the recent announcement that the BDF has been aggressed by the Guatemalans is further proof of that failure.”

Matura-Shepherd added, “Government has not attacked the issue. Every day the Guatemalans are there in the Sarstoon River, both their civilians and their military. They are asserting jurisdiction from the mouth of the Sarstoon River right out to sea.”

“The Belize Government has no customs, no BAHA, no immigration, no fisheries officials out there to enforce our gill net laws. The police in Barranco Village do not have a boat,” Matura-Shepherd pointed out.

“Every time these issues come up, the Prime Minister is away. I am challenging Prime Minister Barrow to visit the Sarstoon, but don’t inform the Guatemalans that you are going,” Matura-Shepherd said.

The BTV’s initial plan on Tuesday was to observe the BDF as they transit through the Sarstoon River en route to Cardenas, but that plan was frustrated due to the earlier-than-expected departure of the BDF from Punta Gorda, Wil Maheia told Amandala in a telephone interview Tuesday night.

That, however, did not stop the BTV from journeying to the Sarstoon Island to make their nationalistic stand, demonstrating Belizean sovereignty over the uninhabited island by placing a Belize flag there, even as a Guatemalan gunboat lurked in the distance about a mile away.

Maheia told Amandala that while they waited for the BDF boat that went to Cardenas to return, they were videoing Guatemalans fishing illegally in Belize waters. Between 50 and 100 persons were fishing, Maheia explained.

They were near the mouth of the Sarstoon River, Maheia said, when suddenly there was a loud sound and two boats shot out of the river. One of the boats was the BDF boat that was returning, and the other boat, which was right behind, was a Guatemalan military boat.

“I don’t know if they were racing, chasing or escorting the BDF boat,” Maheia said. “The BDF boat was heading back to Punta Gorda.”

Amandala called the BDF at their Price Barracks headquarters, but we were told that Brigadier General Jones was out of the country, and the other person authorized to speak to the media, Lieutenant Colonel James Requeña, was not in office.

Wil Maheia told Amandala that there is another planned expedition to Aguas Tubias next month.

Government, however, has already laid down its position that it will not deploy military assets to protect the BTV, but instead will rely on its “diplomatic efforts,” which, so far, in the opinion of many nationalists, have proved to be a miserable failure.

That, however, will continue to expose the BTV to danger, since in his own words, PM Barrow had said that we are “unable to rely on assurances made at the highest level” of the Guatemalan government.