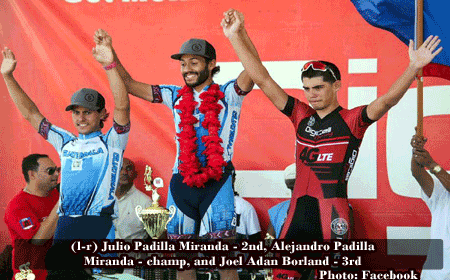 BELIZE CITY, Thurs. Mar. 31, 2016–83 riders from 16 different cycling teams, including 18 foreigners – Mexican, Guatemalan and American – took off from Belize City on Holy Saturday morning with a rolling start at 6:00 a.m. past Leslie’s Imports for the 88th running of the historic Holy Saturday Cross Country Classic to San Ignacio and back (140 miles); and only 40 finished the race within the 30-minute limit after the winner. 15 of the foreign riders were part of teams – Team Starlight of the USA with 4 members (including 2003 & 2004 CC Champion Chris Harkey), Team Cancun of Mexico with 5 members, Team Yapurland of Mexico with 3 members, and the Guatemalan National Team with 3 members. The other 3 foreigners were all from the USA and rode as unattached cyclists, one of them being 2005 CC Champion Bill Elliston. The Belizean teams consisted of Link-Up Cycling (4 members, including 2015 CC Champion Justin Williams), Digicell-4G (8), C-Ray Road Addikz (5), Westrac Alliance (9), Team Smart (8, including 2013 CC Champion Darnell Barrow), Western Spirit Cycling (4, including 2006 CC Champion Shane Vasquez), Becol Uprising (4), Benny’s Megabytes (4), Bel-Cal Cycling (4), Chavarria Cycling (4), Cabral/Marin Cycling (1), and Smart Junior Cycling (2).

It was a fresh south-easter blowing from early on Holy Saturday, so it was not expected to be a record breaking day; yet, after some phenomenal riding, the winner, Guatemalan Alejandro Padilla Miranda, along with his teammate and brother, Julio Padilla Miranda, crossed the finish line in 5:51:09, just 11 minutes above the record of 5:40:12 set in 2008 by American Ryan Bauman.

The race had all the usual ups and downs along the way, with breakaway groups being pulled in by the peloton, and a new breakaway starting.

For one who was unfortunately out of range of radio communication, my first piece of information about the race came from a Facebook post by Kaya Cattouse at 11:34 p.m. which gave the heartbreaking news: “Alejandro and Julio Padilla of the Guatemalan National Team coming for 1-2 finish! They punched joel borland at mile 10 and that’s it for sports!!!”

From all reports, Joel Borland made a gallant effort, but in a team fashion he was simply “double-benked” by the Padilla brothers. The new champion, Alejandro Padilla Miranda had been second behind Mexican Juan Pablo Magallanes back in 2014, so he is no stranger to our Cross Country.

In 2014, when foreigners rode on Belizean teams, the top 7 finishers were all foreigners, including 2nd place Alejandro Padilla Miranda at 5:45:06 and 6th place Julio Padilla Miranda at 5:45:46. The first Belizean then was 7th place Marlon Castillo, who is now semi-retired. Gregory Lovell finished 9th and Byron Pope was 13th that year, and neither of those 3 would be in this year’s ‘Country. Perhaps it was not such a good idea to invite the Guatemalan “national team” after all, as they were the only “national team” in this year’s Cross Country.

It’s in the history books now, and hopefully we learn something from the experience, and are better prepared for next year. Respect to the 2016 Holy Saturday Cross Country Champion, Alejandro Padilla Miranda.