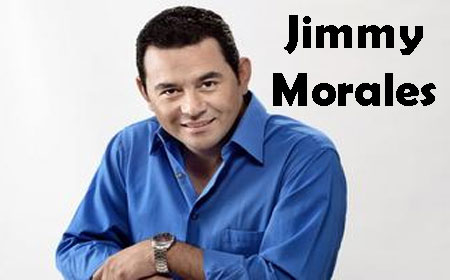 BELIZE CITY, Mon. Sept. 14, 2015–Jimmy Morales, a former comedian and television actor turned frontrunner in the first round of the Guatemalan presidential election, has made some disturbing, if not misleading, remarks about Guatemala’s territorial dispute with Belize — to which, to the best of our knowledge, the Belize Ministry of Foreign Affairs has not responded.

Morales, who is considered a conservative and whose campaign slogan is “Neither corrupt nor thief,” came out of the first round of voting last week Sunday with just under twenty-five percent of the votes cast. The next round of voting is set for October 25, when Morales will face off with Sandra-Torres Casanova, the wife of former President Alvaro Colom. Casanova is the sister of Nardia Garcia, the CEO of Speednet. Casanova has garnered almost twenty percent of the votes cast and analysts consider her to be the stronger of the two candidates.

In an interview last month with Telediario’s Elsie Sierra, Morales said that the most deplorable event in Guatemalan history is the loss of Belize, but there is hope that Guatemala will recover Belize through the International Court of Justice, if the claim is taken there for settlement. The exchange in which Morales made these comments to a reporter is quoted below:

Reporter: “Which Guatemalan historical event do you think is the most deplorable?”

Jimmy Morales: “The most deplorable event – among all the things that have happened in Guatemala, there are certain things that are not spoken about and which I believe we should. Everything that goes contrary to national unity and territorial integrity are things that should hurt us. Something is happening right now, we are about to lose Belize. We have not lost it yet. We still have the possibility of going to the International Court of Justice where we can fight [for] that territory or part of that territory.”

Reporter: “Do you believe that it’s worth it for Guatemala to recover Belize?”

In another interview in the Guatemalan media, Morales spoke about the disagreement between Belize and Guatemala about who exercises sovereignty in the area around the Sarstoon River.  His comments are again reproduced below:

Jimmy Morales, presidential candidate, Guatemala (translated):  “The territorial differendum with Belize. We have a territorial differendum that we, as Guatemalans, can and should be fighting for. But it doesn’t interest us. We don’t even consider what’s happening in the Sarstoon. It is like we are not even interested in all the cayes and the islands and the access to the Atlantic.

“And that is a national subject. It is a major topic that should be a priority issue for us. It should be a main subject for the Guatemalan Ministry of Education to educate the students. Why are we drawing the map of Guatemala without Belize when the position of the Ministry of Foreign Affairs is that the map of Guatemala should be drawn with Belize included and with broken lines because we have a territorial differendum and that we should go to the International Court of Justice? It is a national issue that while it does not interest everybody, it should be a national issue.”