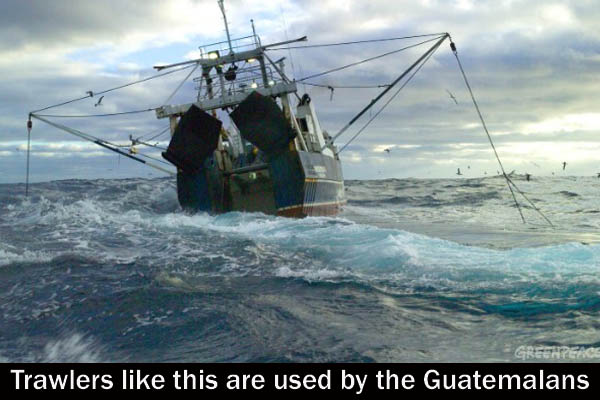 Reports were made repeatedly, but GoB acts as if it “couldn’t care less”

There were reports last week Monday that about 20 Guatemalan trawlers had been spotted operating in the waters of southern Belize, south of Punta Gorda, but word to us at press time tonight, Thursday, is that the trawlers are still in what is believed to be Belizean waters.

Punta Gorda activist and leader of the People’s National Party, Wil Maheia, told us tonight that this is a regular occurrence whenever the weather is good, as it is now.

“We have reported this time and again to our Belizean authorities,” he told us, “but nothing is ever done – the Guatemalans do as they like.”

Maheia said that he blames the lack of enforcement in the area for the repeated acts of illegal trawling by the Guatemalans. It is for this reason that Maheia started his activism, because he feels that there is no official concern for what is happening in that area.

This incident only brings to mind the situation Belize and Guatemala are in as they prepare their countries for what could be one of the biggest historical events in both countries, the October 6, 2013 referendum on the matter of taking the territorial, maritime and insular dispute to the International Court of Justice (ICJ).

Guatemalan citizens have routinely entered Belize illegally and stolen our xate, rosewood and other valuable trees, killed our protected wildlife, destroyed large tracts of our pristine forests, and in general, have done whatever they wanted in a country that is not theirs.

As if these things are not enough, the Guatemalans were caught doing a method of fishing that is prohibited in Belize – trawling. Trawling has been banned in Belize since 2010, largely through the efforts of Oceana Belize.

Oceana Vice-President Audrey Matura-Shepherd said that the illegal trawling seems like an act of aggression by the Guatemalans.

“All I can say is that we view it as an act of aggression from the Guatemalans against us, one,” Matura-Shepherd said. “And two, it is obviously the duty of our law enforcement authorities to make sure that the ban that was instituted is enforced.”

She added that Oceana is only an NGO, and they do not have enforcement powers, so it is up to the Government to enforce the laws through the coast guards and rangers down South.

“The important thing with that, however, is that these poachers or illegal fishers will come at night, when obviously our patrol is not out,” she said. “So we have to be more strategic in how we decide to go after them. We definitely need, as the NGO that pushed for this ban, to make sure that enforcement in possible.”

“The Sapodilla Range is part of our territory, although the Maritime Act did not take the full claim,” she said. “You have to remember that the Constitution is above that. And even [if done] in that good faith, it doesn’t mean that the Guatemalans can come in and do anything in our territory.”

Matura-Shepherd said she thinks there are lots of overlaps and misunderstandings as to what people believe the Maritime Act allows.

“But whatever your doubt is, we assure there is only one answer to it all, your Constitution is your supreme law,” she said. “We’re entitled to our 12 nautical miles, not three, and that means that Guatemalans have no right to come and trawl or do any kind of illegal fishing in our waters, except if we give them the license.”