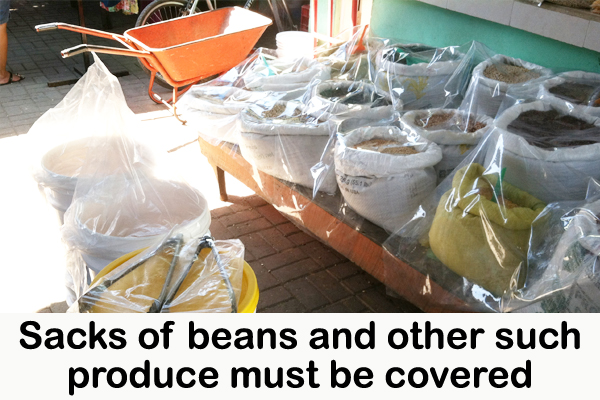 Some weeks ago, we told you about the problem of pigeon infestation at the Michael Finnegan Market (formerly the Queen Street Market), but the Environmental Health Unit in the Ministry of Health quickly stepped in with corrective measures, after observations that pigeons were found eating directly out of sacks of beans left open at the market.

They have mandated vendors to use clear plastic to cover their produce, which they retail by the pound, rather than leaving them exposed to the open air.

Amandala was informed by an official of the unit (formerly Public Health) that their investigations had revealed that some of the market vendors were actually encouraging the pigeons by feeding them. The unit has since asked those vendors to discontinue the practice.

As we detailed in our previous article, pigeons are known to carry an array of pathogens, a serious problem because of their bad habit of dropping their feces anywhere they please.

The result is that humans who come in contact with those droppings can contract histoplasmosis (a fungal disease which causes fatigue, fever, and chest pains), cryptococcosis (a fungal disease which can affect the lung, brain and spinal cord and causes headaches, fever, cough, shortness of breath, and night sweats), and psittacosis (a bacterial infection characterized by fatigue, fever, headache, rash, chills, and sometimes pneumonia).

Amandala understands that Environmental Health officials continue to do weekly monitoring visits along with the Belize City Council.

During that recent monitoring visit, health officials also came across quite a number of persons, who did not have their food handler’s certificate, selling produce at the market.

The officials are also addressing waste disposal problems at the market – also a public health concern.