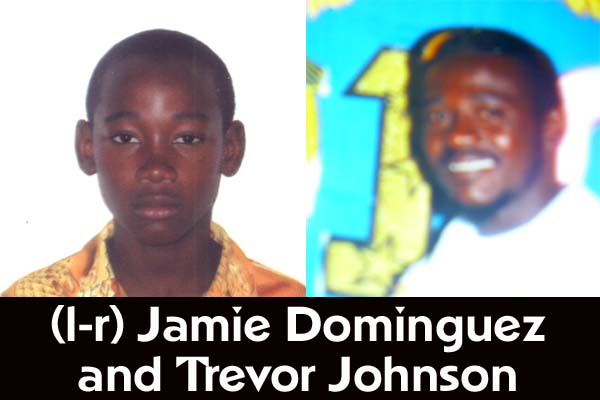 5 people were murdered, and one killed trying to steal farm produce

Six people were shot, stabbed and chopped to death over the bloody weekend of Friday to Sunday, September 28 to 30. The persons who were killed are Jamie Dominguez, 17, and Trevor Anthony Johnson, 28, both residents of Belize City, who were shot to death; Eddie Antonio Sanchez, 35, of Santa Elena, who was chopped to death; a “John Doe” of St. Margaret Village who was shot to death; a security guard of Dangriga who was found stabbed to death at his place of duty; and a resident of the Maya Mopan area who was stabbed to death in his home.

The killings began around 7:15 a.m. on Friday, September 28. Police said that Eddie Antonio Sanchez was found with multiple chop wounds to his head and back, and his throat was slit to his chin. Also, both his hands and right ankle were chopped.

Police said that they were called to Pilgrim Road in the Hillview area of Santa Elena, where they found Sanchez’s body lying at the roadside in a pool of blood. He was rushed to the San Ignacio Hospital, where he was declared dead on arrival.

Police have since launched an investigation into this case, with a particular focus on the fact that Sanchez was arrested by the police and taken to court on Wednesday on aggravated assault charges. He was released from custody after he met bail on Thursday, and he was found chopped to death on Friday. Sanchez was a caretaker at the San Juan Layout in Santa Elena.

That same day, Friday, around 1:30 p.m., Charles Gamboa, 55, a security guard of Dangriga who was employed at the ANRI High School of the Canada Hill Area of Pomona Valley in the Stann Creek District, was found at his worksite at the school stabbed to death. He was taken to the Dangriga Hospital, where he was officially declared dead on arrival.

On Saturday, September 29, around 9:00 p.m., Jose Echevarria, a farmer of St. Margaret’s Village, told police that he was at home on their farm when three men drove up in a pickup truck. They got out of the vehicle and began to uproot some ginger plants they had planted on the farm.

When Echevarria spotted a light on them, one of the thieves fired a shotgun at him.

Echeverria told police that he returned fire with his own shotgun. Two of the thieves ran into the bushes, but the third one drove away in the pickup truck.

Police were called, but no one was found. Police, however, came back to the area around 7:00 on Sunday morning, September 30, and found the body of an unknown Hispanic man, who had suffered shotgun wounds to his back. He was found in an orchard about 10 feet from a dirt road in the village. He had a tattoo on his chest with the word “GIRLA”, said police.

The man was taken to the Belmopan Hospital, where he was declared dead on arrival.

Jamie Dominguez, 17, was shot to death on Sunday morning around 1:00 on Vernon Street. He was found with a gunshot wound to the right side of his head, lying on his back face-up in an old, abandoned Izuzu Rodeo. He was taken to the Karl Heusner Memorial Hospital, where he was declared dead on arrival.

People of the area told police that they heard a single gunshot. They became alarmed and called police who came, and when they looked in the vehicle, they found the teenager, already dead.

His mother, Andrea Dominguez Pratt, told Amandala that she was at home when around 2:00 that Sunday morning when a neighbor came to her house and told her “Jamie!” and she knew immediately that something was wrong.

A family member went to the area and identified him to the police, after which the relative came back and confirmed to her that her son was dead. She said that she was not expecting the death, so it was a terrible shock to her. They had just returned from a church revival and had been in high spirits, but shortly after going to bed, they received the tragic news.

The family strongly believes that he was lured to his death, because of the way he was shot. They are at a loss as to why he was killed, because he was not a gang member or a troublemaker, they said. His mother said that he would sleep in the vehicle sometimes, but would not trouble anyone.

Jamie Dominguez is survived by his mother Andrea Dominguez Pitts, his father Earl Pitts, and grandmothers Corine Pandy and Minnett Dominguez. He is also survived by his grandfather, Richard Dominguez, his godmother, and cousin Carla Pitts, four brothers and a sister, as well as many relatives and friends.

No one has been arrested so far.

About an hour after Dominguez was found dead on Vernon Street, police were called to a scene on Nargusta Street, around 1:14 a.m. on Sunday, September 30, where another body was found on the ground. This time it was Trevor Anthony Johnson, 35, a fisherman of Regent Street. Police said that Johnson, who was wearing a white T-shirt with knee-length white pants and a yellow cap, was lying on the ground, facedown, and barefooted. He had been shot in his right temple, right jaw, right arm and the abdomen.

Police said that their investigations indicated that at around 1:12 a.m. Johnson was chased by a gunman from Mahogany into Hondo Street, where he was shot, but he was able to run into Nargusta Street, where he fell down and died because of the wounds.

His body was taken to the KHMH morgue, where he was declared dead on arrival.

Johnson’s girlfriend, Tracy Merritt, said that she was at home sleeping when her phone rang and she was informed by her brother-in-law that something had happened to Trevor. She was later told that he was dead.

They then went to the morgue, where they saw and identified him to police. She said that he was taken to the morgue from around 2:00 a.m. and she saw him around 12:30 p.m.

She cannot figure out the motive for his murder, because he was a fisherman who loved his children, and was neither violent nor involved with gangs, she said. She said he had no conflicts with anyone, and was hard-working and productive.

Trevor Anthony Johnson is survived by his son, his wife Tracey Merritt, his father William Johnson, and 2 brothers, 6 sisters and a host of relatives and friends.

Police again have launched an investigation, but no one has yet been arrested.

In Belmopan, a man, 53, was killed by a robber in his home in the Maya Mopan area of the city around 1:30 a.m. on Sunday. Police said that an intruder entered the house, and was met by the house’s owner, Robert Lewis, 53. There was a struggle and the intruder sliced Lewis’ throat and stabbed him multiple times in the body. He was found by his wife, who had jumped over the railing of the second floor to escape the killer. She later called police.

Lewis and his wife had just moved to the area about three years ago after living in the United States for many years. The story is reported elsewhere in the newspaper.