Another Hilux stolen from the Ministry of Health compound in Belmopan 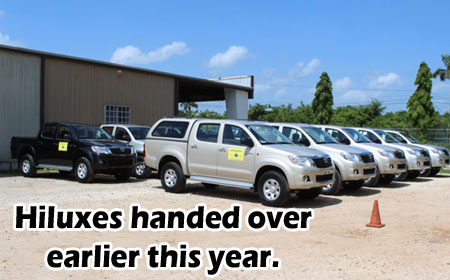 BELMOPAN–A 2008 Toyota Hilux pickup truck has been stolen from the Ministry of Health compound in Belmopan and as of press time, the vehicle has not yet been found.

The driver of the pickup reported that at about 9:00 last night, he parked and secured the vehicle in the Ministry of Health compound, but at about 7:00 this morning, when he reported to work and went to get vehicle, it was not where he had parked it, and it was nowhere to be found.

Superintendent Howell Gillett, Commander of Belmopan police, said that the vehicle which was stolen is not one of the new ones that were donated to the Ministry of Health by the Pan American Health Organization with funding from the European Union, but an older vehicle.

On Wednesday, July 16 this year, 11 Toyota Hilux double-cab diesel pickup trucks were handed over to the Ministry of Health at a cost of about $7,025,000, which is a part of a contribution agreement that was signed in December 2013, in which both the EU and PAHO made a commitment to lend support to the health sector for the prevention and control of dengue and malaria in Belize for a period of twenty months.

However, three of the pickups have been stolen, and police seem to be unable to make any headway in the cases.

The pickup which was reported stolen today is the fourth truck to be stolen from the Ministry, giving rise to the belief that they are being stolen by means of inside collusion in the Ministry of Health.