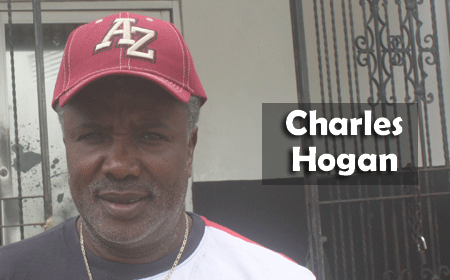 BELIZE CITY, Mon. Oct. 23, 2017–Amandala (A): Three draw games!?
Charles Hogan (H): Three, back-to-back-to-back!
Part 4
A: Sometimes, I have to wonder about those days… because they had some games in Belize City too; and sometimes I would say, “I wonder if those referees… if they wanted draw games, because it is more crowd for the next game… and they are making money… So, what happened after that?

H: Alright; so then it was time for game number 4. Oh, mein people were coming in from as far as Mango Creek as far as Placencia. They were sending down their trucks from twelve o’clock; and this game was at two-thirty…

A: I guess, Manfred Atkins reported on it in his Sports Report on Radio Belize, no?

H: Oh, yes, man! On the radio station they, were doing good with their reports they were saying, “In Dangriga Town, there is a big rivalry going on which is classic and this is going to be the fourth game, and there must be a winner there must be a winner…” Of course, we were conscious of what Pele was doing… They were running during school time, to Pelican and back…

A: They got time off? Faada gave them time off from school?

H: We didn’t know; but somebody came and told us, “Those guys are running right now to Pelican, even as I speak.” So, we had no choice but to start training hard too. So, with all our talent, and that extra training, which gave us an edge…. that’s when I knew that you could play football, but you have to put in that extra work… to be a little bit better… So, when game number 4… I always remember this, that I was called into the office by Mr. Longsworth… He said, “I don’t want to talk to the whole team; I want to talk to you alone.”

A: But you were not the captain.

H: I was not the captain; but I was the star left wing… because he saw what I did in game number 3, how I took on the whole defence…

H: “Any means necessary! Take on the whole defence if you have to; but when you are in the middle, give-and-go, give-and-go.” He said, “I want this game to end.” Because you know, there were guys from Queens Park Rangers and guys from R.A.C. Highlights talking to him and telling him what to tell me. And that’s what he was bringing down to me in his office.

And when the whistle blew for game number mein, I tell you, the stadium was packed, packed, packed… And, I did what I had to do… Richard Leslie, the captain, scored and then it was my time… My first break-through, the goalkeeper made a miraculous save. Then the crowd said, “Don’t worry, he is coming back at you. Give him a couple minutes; he’ll be back.” So said, so done; I was back again, and I scored. So, that was all we needed. We are leading 2-nil now… so there was no way they could get back.

A: I know those are not high scoring games; goals are scarce.

H: That’s because everybody is good. So, when I came back the third time again, the whole defence was wiped out again; but the referee blew foul. He said I fouled somebody, so they took away my second goal.

A: Had you already put it in the net, or before..?

H: I had already put it in the net; but then he blew foul… he said I fouled the defence… I bumped him off… but we didn’t need that goal. We still won.

H: Yes 2-nil. And we finished that 4-game series. And then… it was Ebenezer time!!

A: What! They’re bringing you guys to town?

H: Yes, they’re bringing us to the City!!

(To be continued in the next issue of the Amandala)