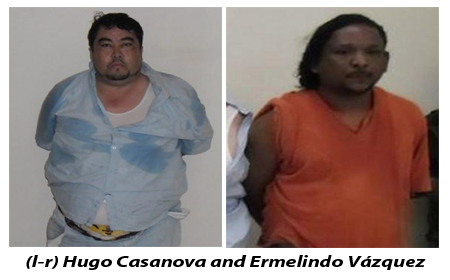 COROZAL TOWN, Thurs. Feb. 4, 2016–Two Belizean men are home free after they were released from a jail in Chetumal, Mexico, where they have been since February 2013, on charges of drug trafficking.

Police said that yesterday, Ermilindo Vasquez and Hugo Casanova, after being released from jail yesterday, were taken by Mexican police to the Belize northern border today, where they were handed over to the Belize police, who, after doing checks to ensure that the two men were not wanted for any offenses in the Belize, were released from custody.

Mexican police say that on February 7, 2013, the two men were busted during a sting operation at the home of a well known drug dealer in Chetumal and southern Mexico.

Diario Respuesta, of Quintana Roo, Mexico, of Thursday, February 7, 2013, reported that the two Belizeans, along with Carlos Cabañas Catzin, alias “El Monstro” of Chetumal, whom the article describes as a “drug lord,” were arrested on the evening of Thursday, February 7, in Chetumal, Mexico, along with five other people for possession of 45 kilograms of the synthetic drug known as crystal meth.

According to reports, 45 kilograms of suspected crystal meth amounted to about 50 thousand doses, ready for distribution and retail marketing.

Vasquez and Casanova, as well as Catzin (described as a “Mexican drug lord of The Pelones in Chetumal”) and five other individuals, who are suspected members of organized crime rings, reportedly were captured in Catzin’s home by Mexican Naval Marines during a sting operation.

The drugs, which were valued at approximately 11 million pesos (the equivalent of USD $1,000,000), were found grouped into bags, and these in turn were found in several refrigerators.
According to the Diario Respuesta, members of Mexico’s Navy, along with other federal agencies, planned their raid on Thursday afternoon and soldiers of the 25th Battalion Marines went to Catzin’s home on Avenida Benito Juarez, where all the persons were arrested.

Por Esto reported that on Friday, January, 27, 2016, the men were taken to a court in Chetumal for trial for the offences, but the men were released due to insufficient evidence, and the case against them fell apart, and so they were acquitted.