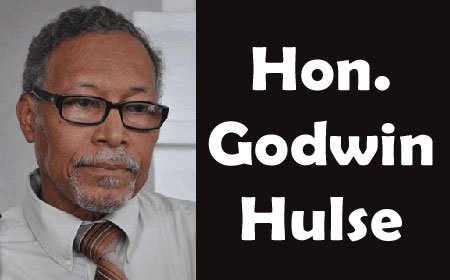 BELIZE CITY, Tues. Aug. 2, 2016–The Belize Police Department was on Monday assigned to a new Minister, Hon. Godwin Hulse, after Prime Minister Dean Barrow, head of Cabinet, decided to pull that portfolio from National Security Minister John Saldivar because of public concerns over Saldivar’s reported association with the man known in Belize as William Mason, recently remanded on murder and kidnapping charges.

Hulse, who was given the job on Monday morning, takes over the Police Department at a time when major crimes, particularly in Central Belize, are on the increase, with the rate of homicides in the Belize District area being the primary concern for residents and authorities alike. Hulse said he is confident that they can improve the situation.

We asked Hulse what are his plans; he said that he did not have any yet, but would imminently work on charting the way forward after meeting with relevant police staff.

Hulse told the media Monday, “There are two things that are legend with me: I will listen to everybody, hear everybody’s complaint, try to work with everybody, because I believe in the positive C’s: compromise, the corporation, the comrade. But I have zero tolerance for anything else and it doesn’t matter who that is.”

In speaking with the press on Monday, Barrow said that Hulse takes over at a critical juncture.

“We all know, to put it mildly, that all has not been well at the Police Department,” Barrow said.

He pointed to the “personality conflicts,” “press jealousy,”and “an appearance of fiefdom” in the higher echelons of the department.

We asked whether a restructuring of the Police Department is also imminent, but neither Hulse nor Barrow would venture to say at this point whether that would follow. Hulse indicated that he would have to assess the situation and report to Cabinet.