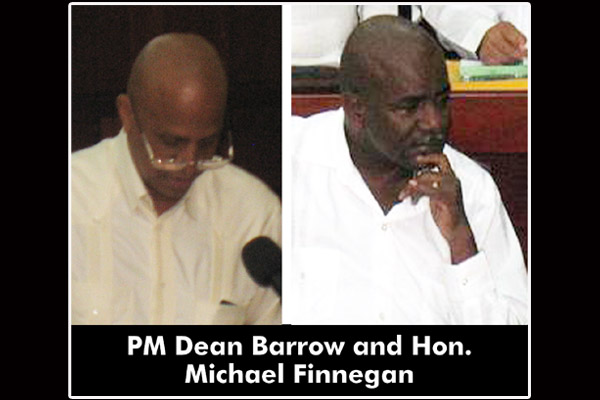 “You are not just a domestic and a local pariah – you are an international outlaw!”

“Your entire career has been a tissue… of lies.” – Barrow to Musa

The National Assembly was the battleground today for a war of words waged between the ruling United Democratic Party (UDP) and the Opposition People’s United Party (PUP), which exchanged verbal jabs over a recent ruling by the Caribbean Court of Justice (CCJ) – one which Prime Minister Dean Barrow said, found Opposition Leader Francis Fonseca and former Prime Minister Said Musa to be “international outlaws.”

Barrow tabled a peculiar resolution at a Special Sitting of the House of Representatives Wednesday—the first meeting of Parliament in five months. That motion was aimed at shining the national—and perhaps the international—spotlight on a CCJ recent ruling which deplored actions taken by Musa and Fonseca in signing a settlement deed with BCB Holdings and the Belize Bank, two entities within the so-called “Ashcroft Alliance,” which gave these two entities extraordinary tax concessions without parliamentary approval.

The resolution passed on Wednesday said, “…this House strongly deplores and deprecates the actions of the Member for Fort George [Musa] and the Member for Freetown [Fonseca] while in Government in purporting to usurp the authority of the National Assembly by granting tax concessions entirely contrary to the laws of Belize.”

The debate on the motion ended up with a walk-out by Musa, who returned later in the meeting to hear the presentation of another motion by PUP’s Julius Espat for the reform of the Public Accounts Committee. (See story elsewhere in this edition of Amandala.)

The CCJ motion, dubbed “Implications of the Decision of the Caribbean Court of Justice on the Public Policy of Belize Motion, 2013,” noted that on March 22, 2005, Musa and Fonseca, who is currently the Leader of the Opposition, signed a settlement deed with Carlisle Holdings (now BCB Holdings), and they amended that agreement in June 2006, indicating that effective April 1, 2005, the Michael Ashcroft companies were to enjoy “a tax regime specially crafted for them and repugnant to the Constitution and tax laws of Belize…”

The companies won an award of BZ$44 million from the London Court of International Arbitration (LCIA)—not US$44 million, as indicated in the CCJ’s press release on the ruling—but the CCJ, on July 26, 2013, struck down that action by Musa and Fonseca.

“That is the basis the court said on which we would then have absolutely no choice but to refuse to enforce this award. And the court found that even by all the international legal norms, what you and the Leader of the Opposition did, shocked universal conscience. You are not just a domestic and a local pariah – you are an international outlaw! That is what the court said,” Barrow commented.

“We accept the decision of the CCJ, but we will not take lectures from this Prime Minister, from those who have made millions from the same Ashcroft Alliance… and who now continue to fatten relatives and cronies fighting the same alliance that they once represented,” said Musa, adding that no one can accuse him of making any money off this matter.

While Musa took responsibility for the signing of the settlement deed, Fonseca added that they learn and grow from their mistakes.

Musa said that he acted in good faith to try to settle disputes arising out of the PUP’s manifesto commitment to interconnect new phone companies and to bring to an end to the monopoly of Belize Telemedia Limited.

“That was the genesis of the dispute,” said Musa, explaining why his administration bought BTL from the Ashcroft Alliance – only to sell it back shortly afterwards.

“It is indeed, however, the height of hypocrisy for this Prime Minister to seek to use the decision of the CCJ – when as Leader of the Opposition, he and his law firm were allied and represented the Ashcroft interest,” said Musa.

“There is absolutely nothing wrong with that,” Barrow replied.

He added that whereas Ashcroft can pay him to represent him in court, when he comes to the House, he stands for the people of the country.

“I will denounce Mister Ashcroft every time, in collusion with [the] People’s United Party, he does anything wrong; and I did that over and over,” Barrow replied.

Musa said that the PUP never awarded million-dollar contracts to any of its special lawyers; in all the cases since his administration, he said, Government has been represented by the law firms of the Prime Minister, Barrow and Williams or Miss Lois Young Barrow.

He said that Government had claimed that its intent was to put an end to the debilitating lawsuits – but that has not happened.

“In a curious twist of fate, the decision of the present prime minister, when confronted with what he called ‘intolerable state of affairs” caused by continuous protracted litigation, that the owners of Telemedia, Ashcroft, was subjecting the country to, his decision was to compulsorily acquire BTL. And of course they make a big song and dance about nationalization… I wonder in what way the Belizean people are benefiting now, Mister Speaker?” Musa said.

He went on to highlight that the Court of Appeal had struck down the BTL acquisition as unlawful, void and unconstitutional – “let’s not forget that!” Yet, in 2009, after the court ruling, the UDP government sent in police and the army to forcibly take control of the phone company.

“Those are the facts. Now you call that democracy? Is that what you call a democracy? That’s not what the people of Egypt are saying now when the army takes over,” said Musa.

Within weeks of that, the Barrow administration went back to Parliament to pass new legislation to reacquire BTL. Musa pointed to “the infamous 9th Amendment – now 8th Amendment, in which they sought to put their power over the Constitution of Belize; even though the law says the Constitution is the Supreme Law of Belize.”

“They went so far as to trash, tamper with and gut the Constitution of Belize…” Musa commented.

“Even this reacquisition has now been declared null and void by a judge of the Supreme Court. Of course, it’s awaiting appeal,” he added.

The question of how much money the litigation web has cost the Government and people of Belize has still not been answered; and Barrow, the Minister of Finance, declined to give any specifics at today’s House Sitting.

Barrow said that he is certain the public has no difficulty with their paying professional fees to try and ensure they don’t pay those millions upon millions – all as a consequence of what the then PM, Musa, and current Leader of Opposition, Fonseca, did during their tenure. As far as Barrow is concerned, Belize has saved BZ$44 million.

Speaking of the tax concessions granted under the settlement deal, Pickstock area representative and Attorney General and Minister of Foreign Affairs, Wilfred Elrington said, “I hear people cheering on what the member for Fort George was saying. I can’t comprehend why is it that they were cheering, because it is their money that he took and gave to the richest man in the country. How you people could cheer for something like that? How can intelligent people cheer when in fact their families, their friends, their country, their nation is suffering under poverty?” asked Elrington, adding that the PUP “presided happily over poverty” and had somehow induced people to think it is good and to cheer over it.

During the course of the debate on the motion, Elrington and other members of the ruling party side called for the resignation of Musa and Fonseca.

“I will feel completely good – liberated – if, in fact, the two members on the other side would do the decent thing and get out of the faces of the Belizean people; remove themselves from the political scene. That is what any decent, honorable, caring, conscientious patriot would do,” Elrington said, adding that they should resign because, he said, Musa and Fonseca, have turned on their people and breached their trust.

Recalling the assertion Musa had made that Jeffrey Prosser had paid for the shares in BTL – when he had only given a promissory note – Barrow said to Musa: “Your entire career has been a tissue… of lies. You do it over and over and over and over again; and then you expect to get a free pass by coming here this morning and saying, ‘I respect the judgment of the court?’ No man, no man! Do what you are supposed to do; do what follows logically: Don’t just respect the judgment of the court. Resign! …go at once!”

Shortly after a few more exchanges, Musa left the room with his envelope of parliamentary papers.

“Oh, you’re going? You can’t take it? I need to express the hope, Mister Speaker, that this departure of his will not be followed by any return – not now, not ever!” said Barrow.

The motion was passed through all its stages in one sitting of the House, and the debate on the motion spanned hours of Wednesday’s House proceedings.

Facebook
Twitter
Pinterest
WhatsApp
Print
Previous articleHeadaches for Police Constable Bustillos, who returns to work after illegal absence
Next articleThe 4th Day of Healing to be held this weekend