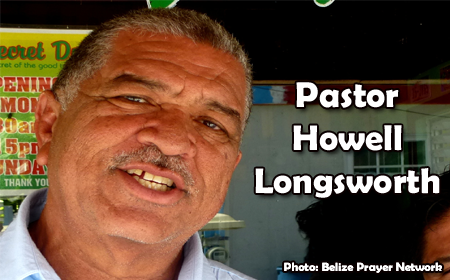 BELIZE CITY, Mon. Sept. 19, 2016–This is a short story of politician turned pastor, Pastor Howell Longsworth, who has a history of attracting controversy.

After the UDP’s Derek Aikman was expelled from his Freetown seat in the House of Representatives in late 1992 on the grounds of bankruptcy, Howell Longsworth, a businessman, was anointed his successor.

However, many political pundits believed that Longsworth’s entrance to politics came at the expense of Aikman, who many believe was targeted not really because of bankruptcy, but because of his opposition to the Maritime Areas Bill which the ruling PUP had proposed, and the Opposition UDP had also supported.

In international law, Belize is allowed to claim twelve miles of territorial waters. However, in the Maritime Areas Bill, Belize would only claim three miles, allowing Guatemala and Honduras access to the seas down south as an incentive to Guatemala for them to recognize our independence and territorial integrity.

So Aikman was the only elected UDP representative, along with the unelected Hubert Elrington, brother of Hon. “Sedi” Elrington (UDP), who supported Philip Goldson’s protest against the bill.

Longsworth suffered a major defeat, and thus the UDP lost a seat it had once secured.

Prior to this defeat, Longsworth had been appointed by the UDP as a CARICOM Ambassador.

Sometime later after his stint with politics, Longsworth was ordained by his preacher friend, Reverend Renee Henderson, who was ordained in the United States, and became a pastor.

However, despite being ordained, Longworth is still considered by many in the UDP to be a firm supporter of the party.

Last September, days after Prime Minister Dean Barrow announced the date for the general elections, Longsworth again stirred controversy inside the church. He heads the Belize Association of Evangelical Churches (BAEC), which had suspended several of its members for requesting a meeting with the BAEC concerning a new Constitution, which had been in development for the last four years and was nearly complete.

However, those suspended pastors, who reportedly represent over 240 churches compared to 6 churches in Pastor Longsworth’s organization, and who went on to form the National Evangelical Association of Belize (NEAB), would have no say in the selection of its senator because the law only makes provision for the Council of Churches and the BAEC to select the Churches’ senator, even though the split between the NEAB and the BAEC occurred almost a year ago.

As the law stands, only Pastor Longsworth’s organization can speak on behalf of the evangelicals, even though the splinter group reportedly has the membership of about 40 times the number of churches under Longsworth’s control.

Therefore, Longsworth, who was left with only 6 pastors and churches, remains legally recognized, unlike the NEAB.

BAEC’s legal status allowed Pastor Longsworth and 6 Belize City pastors to select Pastor Ashley Rocke to serve as the Church’s representative in the Senate.
Rocke succeeded Pastor Noel Leslie, who was selected by the Council of Churches during Barrow’s 2012-2015 term.

Like Longsworth, Rocke has also publicly expressed pro-UDP sentiments which were especially visible leading up to the last general elections in 2015.

Rocke’s vote against the Opposition’s motion to appoint a Special Senate Select Committee to investigate the findings of the recent Auditor General’s report on the scandal in the Immigration Department was supported by Longsworth, who staunchly defended his senator.

Pastor Rocke had initially risen in support of the motion, in line with the wishes of the Roman Catholics, the Methodists, NEAB and others, but he later changed his vote.

Amandala has made efforts for almost two weeks to talk to Pastor Longsworth, but he has never returned our calls.