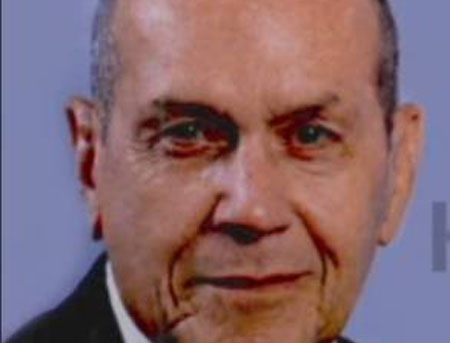 BELIZE CITY- Iconic businessman Karl H. Menzies, 86, owner and founder of Karl H. Menzies Company Limited and group of companies, died at his home with his family on Saturday due to natural causes after battling a long bout of illness.

A church service to honor “Karlie” (he was cremated earlier) will be held today, Thursday, at the St. Joseph Church on St. Joseph Street at 2:00 p.m.

His daughter Kay said that her dad was a humorous person – a quality for which he was well-known, but when the occasion required it, he was of the utmost seriousness. He started from humble beginnings in the Mesopotamia area, where he lived with his parents and 18 brothers and sisters. Karlie worked himself up to the point where he founded and operated his own businesses, and his is a true success story.

Karlie never forgot his beginnings, and he was a proud Belizean who always tried to push Belize forward in a multiplicity of ways.

His mantra was that it was not how much you earned, but how much you saved. From the tender age of 8 years, he began to save 50% of what he earned. He would do chores for people and at the end of the week, he was paid 10 cents, out of which he saved 5 cents – a practice he carried on for years.

At a young age he learned devotion and dedication, and love of family. Early in his career, he was earning $5 weekly, when he was employed at Harley’s Store in Belize City and out of this he supported his mother with $3 weekly, after she and his father separated. He increased his support as his salary increased.

During an interview on 7News Belize on the Restore Belize Program, he was asked what his best achievement was. Karl did not mention his considerable wealth and properties; instead, his answer was the treatment and support he gave his parents.

When his father became unable to work due to illness, Karl bought a house for him, supported him financially and did all he could to help him. He also supported his mother with his meager salary until she passed.

He said that he loved the 4H Club, of which he had been the president for 43 years. He derived a sense of satisfaction after purchasing 9 computers for 4H and building the computer lab for the students of the club, and seeing them spend almost all the spare time they had in the lab, working on the computers.

He began his company, Karl H. Menzies, in 1969 with his wife, Dorothy. He started it as the agent in Belize for Heineken beer. He eventually included groceries, foodstuff and other items in his inventory before developing an emphasis on hardware that lasted almost twenty years, eventually extending to paints and other coatings.

More recently, his company diversified into beverages, including Rhino Energy Drink and the entire Angostura line of beverages and sauces. In addition, his company represented many brands, including global brands such as SIA Abrasives, Leyland & Johnston’s Coatings, Kaleidoscope Paints, and Automotive Art.

Karl H. Menzies was proud that his business was among the many companies which are making a difference in Belize. For many years it supported numerous projects, supporting community development and awareness, childcare and projects geared toward the improvement of Belize.

In recognition of Karl’s and Dorothy’s endeavor to support and develop childcare, the St. Thomas Street Children’s home was re-dedicated and renamed the Dorothy Menzies Child Care Center.

Karl was eventually made a travelling salesman, and when an offer was made to him to be the sales manager for British Honduras Distributors, he accepted, and he became a distributor.

He later decided to get married and set his eyes on Dorothy, a beautiful young lady. The courtship lasted for 5 years, after which he conquered her heart, and they were married. They remained together until the time of his death, on Saturday, October, 11.

Among his many accomplishments, Karl had been president of the Holy Redeemer Credit Union (HRCU) from 1997 to August this year.

To honor him, HRCU and Karl H. Menzies Ltd. will be closed for business today, Thursday.

Karl H. Menzies is survived by his wife Dorothy, his daughter Kay, and a host of relatives and friends.