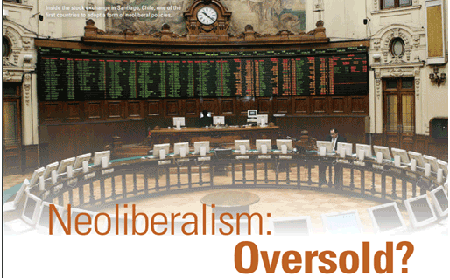 BELIZE CITY. Thurs June 2, 2016–Out of the International Monetary Fund (IMF) the Deputy Director Jonathan D. Ostry, the Division Chief Prakash Loungani and Economist Davide Furceri of the Research Department have published a report entitled “Neoliberalism: Oversold?” offering some insider dissent to the exploitative political, social and economic ideology with which most of us live, today.

Aditya Chakrabortty responded to the report with a Guardian article entitled, “You’re witnessing the death of neoliberalism – from within”, in which he explains the importance of the report’s title, alone: “For so long mainstream economists and policymakers have denied the very existence of such a thing as neoliberalism, dismissing it as an insult invented by gap-toothed gap-toothed malcontents who understand neither economics nor capitalism.”

Its proponents have at once denied that neoliberalism exists, while simultaneously pushing its agenda. Much like the shock that former US president Bill Clinton caused when he referred to “neo-colonialism” while in Haiti, a country whose economy he devastated. He and his partner, current frontrunner of the US Democratic Party, Hillary Clinton, lobbied for foreign investment in the form of sweatshops, mega-tourism and the continued UN-MINUSTAH occupation after the earthquake- definitively, “neo-colonial”. Words like “neoliberalism”, “neo-colonialism” and even “capitalism” are not often directly referred to by the rich.

The IMF has been among the main cheerleaders of that same “neoliberal agenda” that dominates most of our lives today and whose rise (or resurgence) is attributed to the likes of Ronald Raegan and Margaret Thatcher. For decades, the IMF and the World Bank have been encouraging cash-strapped countries to take out loans, requiring that they slash public spending, remove subsidies and open up their markets to free trade with US and European multinationals. The report begins with the case of Chile: “Milton Friedman in 1982 hailed Chile as an “economic miracle.” Towards Freedom journalist Benjamin Dangl points out that the report fails to note that Chile’s neoliberalism was pushed by the US-backed dictator, Augusto Pinochet.

That top IMF research economists have produced a report about neoliberalism, critical of neoliberalism and even calling it such. Otherwise, it is for most people an uneventful and inaccurate report. That they have linked neo-liberalism to “increased inequality” is certainly not offering anything new to the billions of human beings whose lives have been shortened by free trade agreements, cuts in public spending, limited regulations, privatization of resources, criminalizing of unions and other pro-business trends. The environment, has also visibly suffered.

But, some are arguing that perhaps if even the IMF is writing that “policymakers should be more open to redistribution than they are”, multi-millionaires will no longer so openly celebrate their getting rich as a sign of a successful economy. Others hope that proponents of neoliberalism will denounce it. As economic disasters flare up and austerity measures are encouraged by capitalist economists, it’s unlikely that after this report they will embrace Zapatismo’s and other models of cooperative economics, but, arguments against neoliberalism can now even quote top mainstream economists.

In Belize, neoliberalism has been avidly criticized by the Amandala. Easily found online, on the 1st of October in 2009 the editorial described “the Belize version of the neoliberalism which was ruling Western world economics after the fall of communism ten years earlier. You sold off national assets, privatized key industries and essentially threw open your economy to the merciless sharks of investment banking, offshore capital, and big time tourism investment. It was Ronald Reagan’s supply side economics on a Third World stage. Crumbs would supposedly fall off rich Dives’ table for poor Lazarus, and everybody would be happy.” Then, in the same newspaper on the 20th of August, 2013, the editorial statement read: “Neoliberalism is an extreme form of capitalism, and at this newspaper recently we have been trying to give you a sense of what it is by publishing excerpts form a book by Naomi Klein.” Klein, author of Shock Doctrine argued that the elite have used disasters as an opportune time to further neoliberal policies.

Critics of neoliberalism abound, and as the IMF report explains, “Instead of delivering growth,” austerity measures, privatizations and limited regulations on the movement of capital, have “increased inequality.” In Belize economics, which adhere to such an agenda has inequality growth. The rich get richer as they impoverish the poor, to the benefit of US and European multinationals.

The IMF report fails to address how much certain people have benefited from neoliberalism. For example, failing to address Pinochet’s connections to Kissinger and the US elite is questionable. Unsurprisingly, the report offers no attempts to demand justice from those individuals and multinationals that have enriched themselves in the hundreds of millions from the “increased inequality”. Naomi Klein tweeted in response to the report, “So all the billionaires it created are going to give back their money, right?”