“In the Paint” – HISTORY REVISITED

BELIZE CITY, Thurs. Aug. 10, 2017–To us who grew up in the late 1980’s, the name Penta Lakers still stands legendary as one of the more decorated and successful semi-pro franchises every assembled in the Jewel. And on Wednesday night I was one of the fortunate fans to be present at the SCA Auditorium to see this legendary team take to the court once again against one of their fiercest rivals – the Bulls, in a game organized to mark the Lakers’ 30th anniversary (1987-2017).

For me, it was truly a night of nostalgia, a trip down memory lane – so to speak. Being in the presence of Belizean basketball legends such as Clinton “Pulu” Lightburn, Alvan Haynes, Frank Lord, Charles Ellis, Emory Bennett, Wilfred “Chickiblue” Nicholas, Peter “Paco” Neal, Frankie Bob, Gordon “Gas” Tillett, Roger “Lash” Tillett, Brads Neal, Jim Scott, Keith Acosta, Leroy Forbes, Harry Dawg, Peter Usher, Cecil Mortis, and all the others was truly an amazing experience, for myself and all those fans that attended the game. 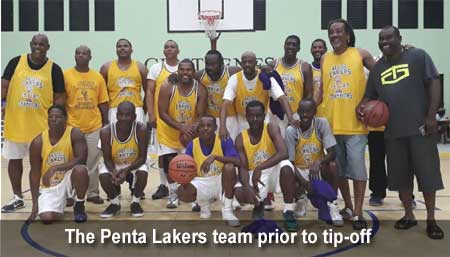 While the game was the main event, and there was a final score, 46-38, in favor of the Lakers, the night was all about celebrating the 30th anniversary of a storied franchise, while honoring the players, coaches, and complimentary staff who contributed to that history-making 1992 season, when they won the inaugural season of semi-pro basketball.

“Milestone moments are special, and it’s great to celebrate the 30th anniversary of one of the most memorable moments in Penta Lakers basketball history,” said one long-time Laker fan. One former player said, “It’s been several years since we’ve been together, and I consider it an honor to share in this celebration.” 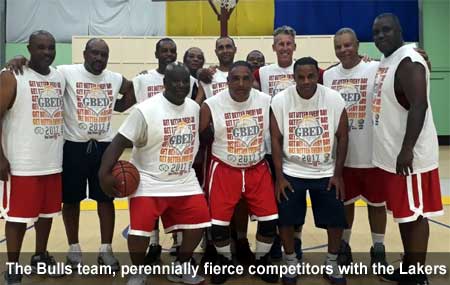 The itinerary for the team included a trip to Goff Caye on Thursday, and an event scheduled for Saturday to acknowledge the 1987 Lakers, that year senior basketball champs. Special awards will be issued to Glenford “Gramps” Jemmott, Francis “Drake” Perera, Norman “Maka” Lamb and head coach Hugh “Pinas” Staine for their contributions made to the team.