Infamous firearm laws to be amended 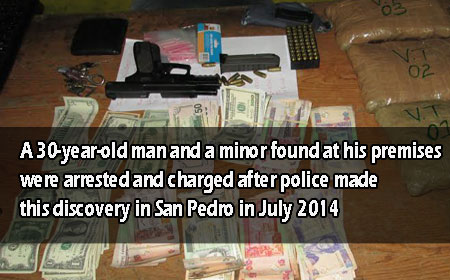 BELMOPAN–Citizen Security in Belize, an October 2013 report of the Inter-American Development Bank authored by Jennifer Peirce and Alexandre Veyrat, said, “Licit and illicit circulation of firearms is a growing concern for Belize, particularly because the type of firearms circulating, including military-style weapons, is increasingly sophisticated.”

It added that according to the head of the Ministry of National Security, Hon. John Saldivar, 95% of homicides in Belize involve a firearm, compared to 80 percent on average for Central America.

Notwithstanding the introduction of sweeping and “draconian” gun laws, with revisions to the Firearms Act in 2008 and 2010, firearm seizures have increased only slightly.

“The Belize Police Department slightly increased its seizure of firearms in 2012, seizing 134 as compared to 129 in 2011, but the statistical reports do not clearly link firearm offenses and seizures to incidents of violent crime (JICC, 2013),” said the IDB report.

Meanwhile, there has been mounting public outcry that the firearms laws have seen more innocent civilians slapped with gun and ammunition charges; and moreover, being placed on mandatory remand for at least two weeks.

Back in February, the Barrow administration promised to conduct a review of the legislation, but when Cabinet met last Tuesday, the bill was still not ready. The Office of Prime Minister Dean Barrow then commissioned Legal Advisor Gian Ghandi, whom Barrow described as his favorite draftsman, to accelerate the work so that a bill could be ready for introduction in Parliament on Friday, as he had promised the media a week earlier.

Barrow said that changes address “…the question of joint possession and trying to ensure that there is not this automatic joint possession charge; looking at who is the head of the household and providing for circumstances where in effect, you can’t charge at all, if you are to avoid the mischief. And then it’s also looking at the question of bail, where when you are charged, you can’t get bail for 14 days, and trying to make a distinction and to say that where somebody is, before being charged, known to be of good character, doesn’t have gang connections, that sort of thing, that the provision that you can’t get bail for 14 days would not apply.”

Amandala today got a chance to see those proposed revisions which address the question of who is required to give evidence, as well as who can be deemed to be in possession of a weapon or ammunition that is found.

In June 2008, a new section 6A was added to the law and the first subsection states that all persons would be deemed to be in joint possession and unless a person caught in what has been described as a “dragnet” by attorney Anthony Sylvestre, Jr., presents the authorities with evidence to show that they knew nothing about the firearm or ammunition, that person would be deemed to be in possession.

Section 6A would now be broken up into four subsections. Section 6A (1) will now say that:

“Where any unlicensed firearm or ammunition is found in or on any premises owned or occupied by more than one person, the following provisions shall have effect:

(d) where a case falls outside the scope of subparagraphs (a), (b), or (c) above and it is unclear who is the owner or keeper of such firearm or ammunition, the police shall, before preferring any criminal charges, seek legal advice on the matter.”

The other provisions in Section 6A cover instances in which a firearm is thrown from a vehicle, motorcycle or bicycle.

On Friday, amendments were also introduced to the Crime Control and Criminal Justice Act, to expedite bail hearing for upstanding persons who may still end up getting snagged by the gun laws.

The amendment proposes that Section 16 (4) (a) adds the following proviso, which means that certain persons would be able to seek bail immediately, thus being able to avoid mandatory remand to Belize Central Prison, although it appears from the current proposed bill that the magistrates still won’t be able to grant bail upon arraignment.

That proviso says that the mandatory 10 working days’ notice to the Director of Public Prosecutions, to seek Supreme Court bail, “shall not apply in cases where the accused person is of good character and has no previous convictions for any of the offences listed in subsection (2) of the said section.”

Visit Amandala online to view and download the draft bills at http://amandala.com.bz/news/crime-control-firearm-amendments/.

Barrow told the press, “We are going to try to come back to the House as soon after Independence as I possibly can, wait a couple of weeks… [to] give people a chance to have their say and if there is more fixing that we have [to] come up with that needs to be done, then let’s try to get it right by the time we come back for second and third readings.”

In Parliament on Friday, National Security Minister John Saldivar said that the crime rate in Belize is up 5% over last year, despite a welcome dip in 2013.