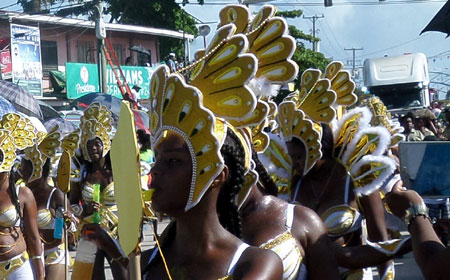 BELIZE CITY, Mon. Sept. 19, 2016–A shot was fired by an off-duty policeman on Princess Margaret Drive during the 2016 Carnival Road March that was held in the city on Saturday, September 17.

The incident occurred at about 5:30 that Saturday afternoon. When the shot was fired, there was mass confusion and panic among the spectators, and there was even panic among the carnival revelers. Police who were nearby quickly addressed the situation and arrested the policeman.

However, no one was injured.

The policeman reported that he fired a warning shot in the air because, while watching the carnival, he was attacked by two men who were throwing bottles at him.

At a press conference held today at the Queen Street Police Station, ACP Dezerie Philips, Commander of Eastern Division North, announced that the cop had been arrested and will be tried internally, since no one made a report or gave a statement on the basis of which to charge him criminally.

ACP Philips said that a woman’s claim via social media that her baby, two years old, was hit by the gunshot,was disproved, because she, Philips, had been told that the baby had been taken to the Belize Medical Associates facility, but when she made a check at that facility, she was informed that the baby had a laceration that was not consistent with a gunshot wound.

She also concluded that no shots were fired at any person.

The Commander said that a person who owns a licensed firearm has the right to take it with him wherever he goes, but it is not advisable to take it to public events like the Carnival Road March. No offense is committed by taking the gun with you, she said, but the gun owner must give a good account if he pulls out the gun and fires a shot in public.

She said that bottles are always a problem at such events, and to avoid people getting hurt, the police were focusing on bottles and picking them up and putting them in the police mobile unit.

The Commander said that they will address this bottle situation, since there are more events that will take place leading up to Independence Day on Wednesday, September 21.

Commander Philips and the police implore gun holders to be responsible with their firearms and not take them to public activities.