BELIZE CITY, Mon. June 26, 2017–There has been no official report coming out of the Ministry of Foreign Affairs on Belize’s participation last week in the 47th General Assembly of the Organization of American States (OAS) in neighboring Mexico—an event which has been making international headlines because of the enduring impasse on the crisis in Venezuela, in the backdrop of which the OAS had to suspend its meeting to adopt a resolution on a proposed mechanism to help end the deadly political unrest in the country known to be one of Belize’s most influential diplomatic allies.

Whereas the split in the CARICOM vote at the OAS General Assembly resulted in the defeat of a US-backed motion for OAS intervention in the Venezuelan crisis—with Belize and 5 other CARICOM nations voting “yes,” but 6 others abstaining and 2 flatly rejecting the proposed resolution—the issue has overshadowed other matters addressed at the event. The church community here in Belize has nevertheless taken note of a less publicized development in Mexico in the run-up to the OAS meeting.

According to international reports, this year’s draft proposal by the OAS on human rights calls for condemnation of “violence” against individuals “with intersex traits”—a proposition rejected by a congress of Latin American parliamentarians.

“Intersex people are those whose biology does not meet our society’s traditional definitions of sex and gender. At least 1 in 2,000 babies and possibly as many as 2 in 100, according to some estimates ¯ are born with ambiguous gender traits. For some, the condition is clear at birth, while others don’t discover that they’re intersex until puberty or later,” said an article, “Here’s What It Really Means To Be Intersex”, published January 25, 2017 by the Huffington Post.

The article goes on to say that, “The designation of intersex actually refers to more than 30 different variations in which a person’s reproductive anatomy and/or genetic makeup doesn’t fit their gender.”

It has been reported that the 2017 proposal for the OAS to explicitly include intersex, which represents the “I” in the LGBTI acronym, was promoted by the state of Brazil, joined by Argentina, Canada, Colombia, Chile, Mexico, Uruguay, and the United States, founding members of the “OAS LGBTI Core Group”—the group which welcomed last year’s ruling by the Belize Supreme Court to legalize homosexuality. 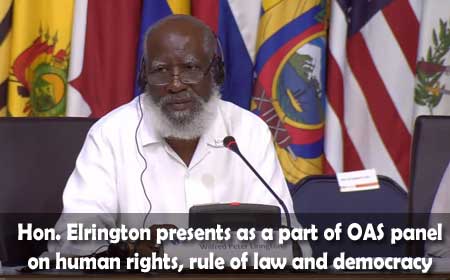 In a statement issued on Friday, June 23, the National Evangelical Association of Belize (NEAB), in decrying the second raising of the LGBT flag by the US Embassy in Belize during LGBT Pride Month, said that, “The international manipulation to have ‘human wrongs’ legitimized as ‘human rights’ continues to push upon our shores.”

It added that, “That manipulation met with stiff resistance at the OAS General Assembly in Cancun this week [as] Latin American nations pushed back against LGBT manipulation and stood firm for their national sovereignties.”

NEAB pointed to reports that over 700 legislators from the Americas met on June 15th, repudiating OAS efforts to disregard sovereignty and to reinterpret international law through an LGBT worldview.

Via its website as well as social media posts, organizers of the First Hemispheric Congress of Parliamentarians, the group led by José Antonio Kast, a lawyer, senator and independent presidential candidate in Chile, married with 9 children, confirmed that they had convened the congress of national legislators in Mexico City on June 15, just days before the OAS was due to convene its meeting.

A report published right after the meeting of the Congress, said: “More than 50 parliamentarians from the vast majority of countries in the hemisphere joined hundreds of legislators who have signed a statement calling on the Organization of American States (OAS) and the Inter-American Court of Human Rights, non-interference with matters that only involve the Member States of the Organization.”

Kast said that the OAS “…must stop aggressively promoting an anti-life and anti-family platform that contravenes the established [norm] in the American Convention on Human Rights.”

Although NEAB urges that Belize, as a nation, should “…support true human rights for all humans, coupled with religious freedoms, education freedoms, and family protections guaranteed in the Universal Declaration of Human Rights,” Belize’s Minister of Foreign Affairs, Wilfred “Sedi” Elrington, who led Belize’s delegation to the OAS GA in Cancun last week, accompanied by Ambassador Pat Andrews, said, at a panel discussion held during the OAS event that Belize has embraced same-sex relations.

“Rights are not static; they seem to evolve. Not too long ago, it was criminal in our country for two males to consort together. That has changed, because we have recognized that in fact people have rights to love who they want to love, and to consort with whom they want to consort – that was not the case years ago, but certainly in our country, we have taken the position,” Elrington told the delegations in Cancun, without making reference to the constitutional challenge which sparked this change on Belize’s law books.

Elrington added that, “It is recognized in some countries that people have rights to marry each other, same sex. That is not something that we in this hemisphere have embraced wholeheartedly, but there are rights which, in fact, exist and are acknowledged in other places…”

He went on to speak of the state of affairs 500 years ago, when the rights of Blacks in the Americas were not recognized, and neither were the rights of indigenous peoples.

“Regretfully, in our own hemisphere, some of our own people, people of African descent, indigenous people, LGBT people and others seem to be of the view that their rights are not being respected, and they are working towards it, but the good news is that as we become more informed, more exposed to the good practices in other more developed countries, we too are adopting those rights…,” Elrington said.

The Foreign Minister said that over the last 8 years, he has always met delegations from the LGBT, Afro-descendants and indigenous communities, making presentations in their forums at the OAS level.

“St. Lucia cannot commit to any provision that undermines the institution of the family or that may lead to the creation of controversial ‘sexual rights’ that may conflict with the rights of children and their families,” the minister said.

She said that St. Lucia was not too long ago listed in a UN fertility report as the country having the highest rate of extramarital births in the world, which means that most children grow up in single parent homes without fathers, which, she said, takes a toll on the social fabric of our society.

The St. Lucian official went on to say that greater emphasis should be placed on protecting and rebuilding the family to safeguard rights of women, children and very vulnerable populations, adding that building and protecting the natural family is a key aspect of that country’s human rights project, in keeping with the Universal Declaration on Human Rights, Article 16.