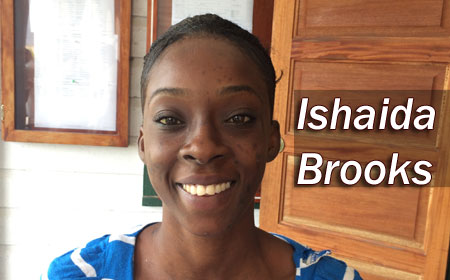 BELIZE CITY, Mon. July 4, 2016–Supreme Court Justice, Madam Shona Griffith issued her ruling this morning in civil claim number 389 of 2015 brought by Alrick Smith, Sr.; Sandra Casey; Leon Smith; Tamica Smith and Ishaida Brooks against the Attorney General. The five persons named in the lawsuit had filed a claim of false imprisonment and malicious prosecution in respect of an incident involving Gang Suppression Unit (GSU) police officers who had found a gun at their residence in July 2014, for which they were all arrested, charged and imprisoned.

The family had just returned from the funeral service for Myron Smith, the youngest member of the family, who had been murdered days before. While they were in their yard, two young men whom police were chasing ran into their house, and when the police followed them and searched the house, a .9mm handgun was found under a mattress in a bedroom.

Ishaida Brooks, 22, who was also arrested and charged for possession of the firearm and was also imprisoned, failed in her claim of malicious prosecution.

Justice Griffith, however, found merit in Brooks’ false imprisonment claim and awarded her $5,000 in damages for the false imprisonment, because she was hauled off to prison and charged along with the Smiths, even though she was not a resident of their Giles Street home and had only gone there when the incident was unfolding.

In finding in Brooks favor, Justice Griffith said there was no reasonable and probable cause, because if the police had made basic inquiries, they would have found out that she was not a resident of the home.

The police, the judge found, however, were exercising a public duty at an institutional level. Five persons were in the house and the gun could possibly have been for one of them.

Justice Griffith said that in relation to Brooks, she did not find that the prosecution was malicious, though “there ought to have been inquiries made by the police.”

Justice Griffith had requested that a senior police officer go to the court to hear the judgment. In explaining the reason for her request, she said, “I do not wish this case to be taken as a victory and as some endorsement by the court that police officers are entitled to just stand on the four walls of the requirement of the act (the Firearms Act).”

Justice Griffith noted that the case was decided on a narrow fact, that a gun was found in a room, under a mattress, in a house where there were several occupants, and none of the occupants testified in court that the young man went into the room and came out before the gun was found.

The judge also noted that this was a case of public importance, aside from the claimants’ claim and the alleged violation of their rights.

In relation to cost of court, the judge said that she has discretion and in exercising her discretion, she will not call on the unsuccessful party to bear the cost. “I do hold that Ms. Ishaida is entitled to her cost,” she said.

“No one should have to withstand what the claimants went through,” Justice Griffith noted.

Following the hearing, attorney Anthony Sylvestre told Amandala and 7 News that, “It would not have been wrong for the police officers to deem that everyone present were in possession of the firearm.”

In her judgment, Justice Griffith also mentioned that “deemed to be in possession,” as it relates to the Firearms Act, “is judicial fiction.”

Sylvestre said that the judge pointed out that it is not in all circumstances that a person ought to be deemed to be in possession, and that’s why the judge called it “legal fiction.”

The government’s case was argued by Senior Crown Counsel Trienia Young and Crown Counsel Leonia Duncan, both working out of the Solicitor General‘s office.