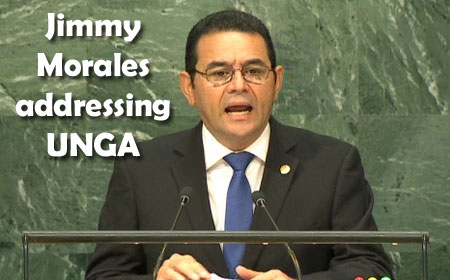 BELIZE CITY, Thurs. Sept. 22, 2016–Guatemala’s president, Jimmy Morales, slammed neighboring Belize at the 71st Session of the UN General Assembly being held in New York City, from September 20-26, 2016, accusing Belize of killing 10 of their citizens near the border since 1999, with the most recent case being the minor who was fatally shot in April 2016.

Morales told the UNGA that the “grave acts,” which he alleges have been committed by Belize, “hamper bilateral relationship and hinder progress towards building trust…”

Morales made these disparaging comments against Belize after he made a bid at the UNGA for the international community to support Guatemalan’s candidature to the UN Human Rights Council for the period 2017 to 2019.

He said that Guatemala and Belize have enjoyed “a privileged relationship,” but goes on to add that in recent months, Belize has not shown a reciprocal attitude.

Guatemala has not accepted the outcome of a recently released report of Mexican and US experts commissioned by the Organization of American States, which found evidence that the Belize patrol, which comprised military and environmental officers, had been shot at, supporting the Government of Belize’s report that the patrol responded after having come under fire under the cover of night.

After that April 20, 2016 incident, the Morales administration responded by marshaling thousands of troops to Belize’s border, fueling fears of a retaliatory invasion.

Despite the findings of the independent OAS-commissioned investigative report, Guatemala continues to argue that Belize has continued to commit human rights atrocities against its citizens, without speaking of the circumstances under which the shooting incidents have occurred.

The experts commissioned by the OAS are also probing two other shootings in which Belizean Danny Conorquie was fatally shot, presumably by illegal Guatemalan loggers at the Caracol Archaeological Reserve, and Staff Sergeant Richard Lambey, was ambushed and shot in the same area. It is expected that Guatemala will, likewise, not accept the results of that OAS investigation.

President Morales claimed that the minor who was shot fatally in April died from multiple gun wounds from a high-powered rifle, citing a forensic report by Belize. He said that Guatemala’s Forensic Service found that there were 9 bullet wounds, 6 in the back, 1 in the back of the neck, and 1 in front.

The expert report filed with the OAS found that the boy had not been shot with military weapons, but with a .22 rifle and a 12-gauge shotgun, which the report said fires 9 pellets per shot. The three shots from the military’s M4 carbine did not injure anyone, the report found.

Amandala readers will recall that when former Deputy Prime Minister Gaspar Vega gave a speech at the Seventh Summit of the Association of Caribbean States held in Havana, Cuba this June about the worrisome and mounting aggression by armed Guatemalan military patrols against Belize security forces and civilians at the Sarstoon River, the country’s southern boundary with Guatemala, Morales took to the rostrum in reply, chastising Vega for using that forum to raise the issue and urging Belize to use the right forum to resolve the problem – that is, to take the matter for resolution to the International Court of Justice.

At today’s UNGA, Morales said that it is the will of Guatemala to find within the framework of international law a definitive solution to the matter.

While he promoted Guatemala as a “good neighbor” which seeks peace, he claimed that it is Belize which has not respected peace and the life of Guatemalans.

Belize is not listed among participating countries, and so far, there has been no official reply from Belize to Morales’ comments.