Home Headline No judgment yet for Gapi and Monchie!
Headline

No judgment yet for Gapi and Monchie! 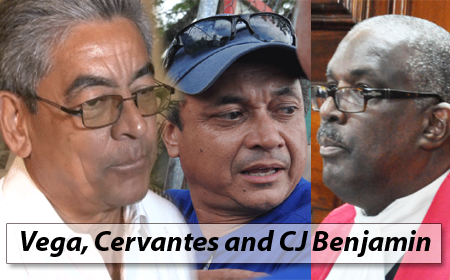 BELIZE CITY, Thurs. Feb. 4, 2016–This morning, the Chief Justice of Belize, Hon. Kenneth Benjamin, was scheduled to hand down his ruling in the slander case brought by Orange Walk North area rep and Deputy Prime Minister Hon. Gaspar “Gapi” Vega, against Ramon “Monchie” Cervantes, his rival and PUP standard bearer during the November 4 general elections, but when representatives from the city’s media houses arrived at the Supreme Court shortly before 9:00 a.m., the usual kind of activity associated with the case was absent from around the court building.

There were no signs of Vega’s supporters, who have been making the trip to Belize City in support of him, and neither were there any Opposition People’s United Party supporters for Cervantes.

The final submissions in the case were made on November 22, 2015, and Chief Justice Benjamin had indicated that he would have handed down his ruling on December 22, 2015. The ruling, however, was pushed back to today, Thursday, February 4.

Amandala was told by attorney, Eamon Courtenay, who is representing one of the two defendants in the case that no new date was given when the judgment will be handed down.

In July 2014, Ramon Cervantes, Sr., was kidnapped and his body found in a shallow grave. In November 2014, the Cervantes family held a memorial service for their murdered patriarch at Mameyal Farm, in Orange Walk.

The highlight to come out of the memorial service was a recorded conversation that was broadcast, in the Spanish language on national radio. The conversation was between Cervantes’ widow and a man named Manuel Castillo, whose allegations about the death of Cervantes, Sr., were such that the Hon. Vega felt that his reputation and integrity had been affected.

While three men have been arrested and charged with Cervantes’ murder, Castillo himself is also wanted by Orange Walk police for the murder, but he was believed to have fled to Mexico, and remains Orange Walk police’s most wanted.

After the broadcast was made, attorney for DPM Vega, Rodwell Williams, SC, dispatched a letter to Ramon Cervantes, Jr., demanding an apology from him or he would face a lawsuit.

Vega had also issued a press release warning other media houses not to repeat the allegations made by Manuel Castillo in the broadcasted conversation.

Cervantes did not apologize and so Vega followed through with his claim at the Supreme Court.

The claim is against Cervantes and Fiesta FM, an Orange Walk-based radio station owned by the Briceño family.

In the claim, Vega is seeking monetary damages from Cervantes and Fiesta FM for the alleged slander of his character.

During the evidence phase of the trial, however, Vega’s attorney, Williams, had failed to get the court to play the broadcasted conversation. The copy of the broadcast that Vega’s side had is a transcript from Love FM, which is not a party to the case; neither was Vega’s side able to produce a copy of the Fiesta FM broadcast.

In their defense, Fiesta FM claimed that they did not air the broadcast because the station had experienced a technical glitch.

Both sides in the case have claimed that they have proven their case, so now it is left to Chief Justice Benjamin to rule on the evidence that was presented in his court.