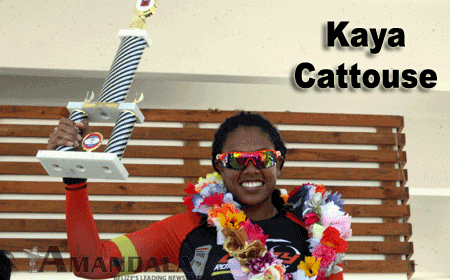 BELIZE CITY, Mon. Mar. 14, 2016–Six females started, and all six finished the estimated 73 mile journey (within the official time limit of 30 minutes after the winner) from San Ignacio to Belize City’s BTL Park on Princess Margaret Drive yesterday in the 27th running of the Women Cross Country Classic.

It is now a team sport, and defending Women Cross Country champion Alicia Thompson gave it her all, riding alone for her Belize Bank Swoosh sponsor, but it wasn’t enough to overcome the 3-member C-Ray Team game plan; and when they succeeded in bringing Kaya Cattouse to the last leg of the race on Princess Margaret Drive, their job was done, and Kaya, Belize’s premier female sprinter, knew she could do the rest. Brimming with confidence after the race, Kaya admitted that Alicia was an extremely formidable opponent, and acknowledged the important contribution of her teammates, to allow her to conserve her energy for the final sprint, which she won handily by a couple bicycle lengths.

It was a beautiful sun-shiny day for cycling and for Reef Week, which culminated the same day at BTL Park in conjunction with the Women Cross Country Classic, for which it was a part sponsor. After addressing the gathering on the occasion of Reef Week, Mayor Darrell Bradley took the opportunity to present the garland to this year’s Women Cross Country Champion, Kaya Cattouse. All race participants received smaller versions of the champion’s garland, including the youngest rider, 13 year old Paulita Chavarria, who rode in alone some twenty-five minutes after the champion, and received a round of applause from fans who had already gathered near the stage for the presentation of trophies. A first year student at Sacred Heart College in San Ignacio, Paulita will turn 14 on April 14 of this year. She rode on the winning C-Ray Cycling Team along with her elder sister Patricia, who placed third in the race.