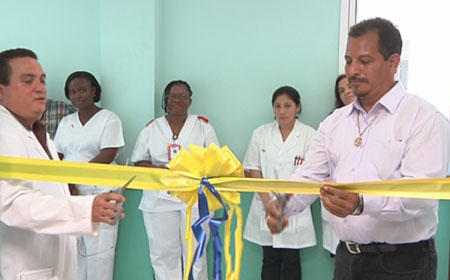 BELIZE CITY–As the country’s premier public health facility, the Karl Heusner Memorial Hospital (KHMH), observed its 19th year of existence today, its administrators unveiled a series of upgrades which had been carried out on both its adult and infant Intensive Care Units (ICUs), as well as on its statistical laboratory.

The improvements were the result of several recommendations which had been provided to the hospital’s authorities by officials of the Pan American Health Organization (PAHO) in the wake of a disastrous bacterial outbreak which claimed the lives of at least eight newborn neonatal patients in the Neonatal Intensive Care Unit (NICU) of the hospital back in May of 2013.

The incidents have severely marred the hospital’s public image since then, and when we spoke to Minister of Health, Hon. Pablo Marin, at the ceremony today, he explained the significance of the upgrades, which include an additional wing of the adult ICU.

He said, “We had the situation with the enterobacter [cloacae outbreak] last year, so we got some recommendations from PAHO and this was the first thing we did – we expanded the Neonatal Intensive Care Unit. We spent about $300,000 to facilitate the expansion and [new] equipment. We did the adult ICU because Dr. Hildalgo and Dr. Arriaga came to me and mentioned that they have a situation, and the following week, I came and saw that we had a problem with cross-infections, so we started to invest and that is the result.”

“When we had the situation with the Neo-Natal Intensive Care Unit, it was just a small little room. [Now], you can see the expansion is three or four times as big; we have about eight ventilator systems; we have two areas [where] you can put any child that has any kind of sickness. In the other Intensive Care Unit, we had everything there, but now, everything is concentrated in one. The Maternity Ward will have their own private ward, and the neonatals will have their own private ward; that is how we’re moving up”, Marin mentioned, as he described what has changed inside the unit.

Marin informed us that the upgrades, which saw considerable expansion to the ICUs and additional, modernized equipment being added to the stat lab, were funded through a partnership between the KHMH and the Ministry of Health at a total cost of around $800,000.

Chairperson of the KHMH Board of Directors, Chandra Nisbet-Cansino, outlined how the modification of the wards, which often became overcrowded, and the additional wing of the adult ICU, will assist in the efficiency of the services provided by the hospital.

She said, “Previously what we called the ICU was basically an area that the hospital had isolated to treat patients that were intensively ill, so it wasn’t the ICU with all the amenities that we have now. At that time, the maximum was about 3 to 4 depending on the severity of the injury, but now we have capacity for 7 to 8 patients who are all intensively ill, all with their own ventilator and all the amenities that are needed to provide for intensively ill patients. The NICU can now accommodate 21 neonates [and their families] in a much expanded area, so it will have a great impact on severely ill patients.”

Nisbet-Cansino was also questioned about the perception that while the upgrades are commendable, they were conducted in response to the deaths of several newborn neonatal patients who were affected by a deadly bacterial outbreak while in the care of the hospital 16 months ago.

“That is the bittersweet [portion] of this event”, she told us, “We are still very sorry about all the babies that passed away during that outbreak… We can never say it will never happen again, but with the facilities that we have now, we can say that the chances of it happening are very low”, she responded, adding that they have been adhering to PAHO’s recommendations, and that most of the deadlines for the improvements have been met, including the strengthening of the Infection Control Unit to fit international standards.

Medical Chief Of Staff at the KHMH, Dr. Adrian Coye, said that while the unfortunate incident will forever haunt the image of the public institution, the services at the hospital have been transformed in its aftermath.

“First of all, that was a very unfortunate and regrettable experience, and we will never be able to shake that off, but what has happened very immediately and subsequent to that is a total transformation, not only in the physical space where the babies are managed, but the whole processes and systems have been changed such that we’ve had many months of zero mortality in the NICU”, he told us.

According to the KHMH Board Chair, the upgrades to the ICUs represent a “significant” leap forward for the hospital, which houses the premier Intensive Care Unit in Belize for both neonatal and adult patients.

Outgoing KHMH Chief Executive Officer, Dr. Francis Gary Longsworth, who said that the works were in the pipeline because the administrators were aware of the necessity for “quite some time”, told us that it feels great to know that the improvements were completed under his dwindling tenure as CEO.

What also took place under Longsworth’s tenure, and which still taints his reputation until this day, is the aforementioned loss of the lives of at least eight infants in the NICU at the time due, directly or indirectly, to a sudden bacterial outbreak which was deemed to be caused by negligence on the part of the hospital – something that some critics have termed “unforgiveable”.

In response, Longsworth stated, “The conditions that existed at the time of the outbreak and what exists now are entirely different. What has not changed is that the hospital has to respond to the demands of the public in terms of providing health care; that’s the position we were in then, and that’s the position we’re in now. What is different now is that we have the space and technology to respond better than we were able to a year and a half ago. We’ve [also] done a tremendous amount of training with our ICU staff, both pediatric and adult, for them to improve.”

Five of the eight families affected in that catastrophe, a sixth having already reached a settlement, decided to sue the institution earlier this year based on its lack of adherence to sanitation protocols, and two weeks ago, on Tuesday, September 2, following a lengthy mediation session presided over by Chief Justice Kenneth Benjamin, a settlement was brokered through the courts.

As part of the agreement, the hospital, we were told, will have to make a formal and public apology for the deaths of the infants, while the payments of $10,000 each are due by September 30, 2014, in default of which there will be further litigation.

Longsworth, who relinquishes his post at the end of this month, mentioned that despite the criticisms which place the blame at his feet for the infamous May 2013 bacterial outbreak, he is grateful for the opportunity that he had as CEO; however, he is not interested in reapplying for the position, citing the need for a “proper vacation”.

We understand that in the meantime, the KHMH Board of Directors is still currently looking for a replacement to fill the post.

Apart from the reopening of the Pediatric or Neonatal Intensive Care Unit at a cost of $300,000, and the spanking new Adult Intensive Care Unit, which now has 7 beds, at a cost of $500,000, the medical Stat Lab was also renovated and renamed in the honor of former KHMH board member, Maria Elena Sylvestre, in recognition for her services in health.