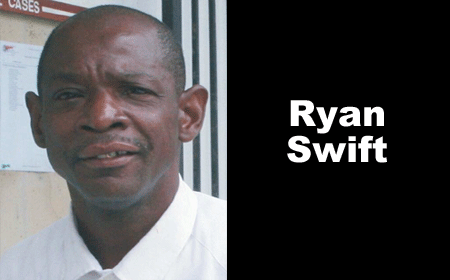 The two brothers had been drinking; Ryan’s brother, Steven, is hospitalized at the KHMH

BELIZE CITY, Mon. Oct. 30, 2017–A staunch supporter of the United Democratic Party is dead, his brother is hospitalized in a critical condition, and the authorities are baffled about what led to the tragedy.

Police say that at around 7:45 a.m. on Saturday, they visited the Swift residence at the corner of Central American Boulevard and Nargusta Street, where they saw Ryan Swift, 54, the owner of Ryan Swift Pesticide Control Agency, inside an ambulance, which took Swift to the Karl Heusner Memorial Hospital (KHMH). Swift, however, died on arrival.

His older brother, Steven Swift, who was seen unconscious on the scene when officers arrived at the residence, was left in the charge of BERT personnel. He, too, was later transported to the KHMH, where he remains more than 48 hours later.

According to initial police investigations, both men were socializing in the lower flat of their residence, when Ryan reportedly began having difficulties breathing. Shortly thereafter, he had a seizure and collapsed.

Steven, a former police officer, ran across the boulevard to get help for his brother, but he, too, had a seizure and collapsed.

During a press conference in Belize City today, Assistant Superintendent of Police, Alejandro Cowo, told the press that when investigators visited the Swift residence, they found several containers of suspected liquor which it appears, the men had been consuming.

Investigators also observed a number of containers that held pesticides and other kinds of poisonous material inside the lower and upper sections of the house.

According to ASP Cowo, investigations so far do not reveal that foul play was involved. He indicated that there was a possibility that the men ingested some toxic substances that they may have accidentally mixed with the alcoholic beverages.

Cowo told the press that before the men began drinking, they were busy working with the poisonous substances.

Mark Anthony Ryan Swift, a son of the deceased, today told Amandala that he had heard similar information shared by the police. However, he is of the view that his father, who has over three decades of experience working with pesticides, would never make such a mistake.

He further pointed to the fact that there are normally many people socializing with his father, but on Saturday, there were only two of them at the residence. According to him, he, too, was supposed to be with his father and his uncle, but had other matters to deal with.

“All I know, he was hanging out with his brother as usual, and what people told me was that both of them were socializing, picking up garbage they did usually every Saturday. I suppose to mi deh deh,” he told Amandala.

Mark said his father sent his uncle to buy rum, but upon his uncle’s return, his father had already collapsed.

The distraught son said that only his uncle can tell the story, if he survives.

Mark Swift will remember his father as a tower of strength who was patriotic and always upbeat.

The young Swift reminisced, “He was very optimistic. He always looked on the brighter side of things. He was a real patriot of the country, meaning that whatever he does, he does it for the country and the betterment of his people.”

He added, “Every 21st and 10th we goh march eena di UDP parade, and everything patriotic he mi deh deh. Ih very active and ih like help people. He was very kind. He tek in people eena his house and foster them and tek care ah dehn if dehn noh have nothing. He just had a kind heart.”

Mark said his father loved politics, particularly the United Democratic Party (UDP), for which he was a popular campaigner.

The deceased’s last campaign was in August, when he sought to have his son earn a spot on the UDP’s Belize City Council slate to vie in the 2018 municipal elections. Although all didn’t go as planned, the young Swift dreamed of trying again with his father’s support. However, that dream is now shattered.

“He seh, ‘let’s go fi it son, I wahn deh deh fi yuh. I never lost a convention’. He kept saying that to me, until the end when he said I still, did good for the first try. And I tell ahn di next time when I run, me and yuh again, right Dad? I think I mi wahn see that day. I nuh wahn see da day again,” the young Swift said sadly.

Ryan Swift leaves behind 7 children. Police hope to conduct a toxicology examination after retrieving a sample of Ryan Swift’s blood and that of his brother.