PLACENCIA, Stann Creek, Wed. Jan. 4, 2017–A male killer whale known as the orca, spanning more than 30 feet, has surprisingly surfaced in the south of Belize—a very rare sight in our tropical waters. The majestic apex predator aggressively warded off Belizean tour guides and stay-over tourists who were on a trip in the Ranguana Caye area last Thursday, before heading north with another adult whale and a younger whale of the same species, presumably on a migratory trip to cooler waters.

Known scientifically as Orcinus orca, this type of whale is distinguished by its distinctive black-and-white skin patches.

Jason Westby, who conducts fishing tours with a few different resorts as a freelance tour guide, told Amandala that on the day of the incident, he was working with Chabil Mar, and he was touring with a couple from Texas, USA, when the drama unfolded sometime between 9:30 and 10:30 a.m. on December 29.

At the time, they were between Ranguana Caye and Palm Owens Caye, both located on the Belize Barrier Reef. They were situated about a mile and a half from the drop-off of the reef when the sighting was made.

Westby said that tuna, a prey of the orcas, were likely about a mile from where they were, since there was a sighting of birds in the area.

The tour guide said that when he first saw a big splash, he did not know what it was, and told his guests, “Guys, there is something massive over there!”

Westby said that he thought it was a marlin, but jokingly said that it must be an orca – the killer whale which is a predatory species in the dolphin family. It is said that orcas don’t eat people, although there have been reports of non-fatal attacks.

“It was jumping straight at us like a freight train. I reversed the boat and he kept jumping at us and flapping, perhaps to ward us off,” Westby recounted.

There were three orcas, including a baby whale, the tour guide told us. He believes that the adults were about 30 to 32 feet long, much bigger than his 23-foot skiff.

“After about 5 to 6 minutes, another orca jumped in a distance, then we noticed that there were two whales consistently moving on the surface,” said Westby, adding that they eventually realized that there were three orcas in all.

“All of a sudden, they started to head north. We followed them for about a half-mile and turned back and went trying to fish again,” he said.

Blue Reef Adventures posted a video on Facebook of the encounter with the orcas, captured by another tour led by Rowland Alford, and it has captivated the attention of many nature lovers.

According to National Geographic, the killer whales known as orcas are the largest of the dolphins and one of the world’s most powerful predators.

“They feast on marine mammals such as seals, sea lions, and even whales, employing teeth that can be four inches (ten centimeters) long. They are known to grab seals right off the ice. They also eat fish, squid, and seabirds,” it added.

Westby suspects that they must have been feeding on tunas in the area where yellowfin tunas had been recently spotted.

The tour guide told us that he has been trying to research when the last sighting in Belize was recorded, but he did not find any information to satisfy his query.

“I would really like to know myself,” Westby told us.

Leo Flores, who commented on the video posted on social media, said: “There have only ever been about a dozen sightings in the Western Caribbean in the past 150 years, according to data collected for ‘The Mammal Society’ from 1866 thru 2012: 1 south of Belize City, 1 near Lighthouse Reef & 1 south-east of Belize’s Sapodilla Cayes… plus in 2014: Orcas [were seen] near Maugre Caye around Turneffe.”

He added that, “…this new 2016 sighting north of the Sapodilla Cayes near Ranguana Caye highlights the importance of protecting all wildlife by making our waters as safe as possible for them!” 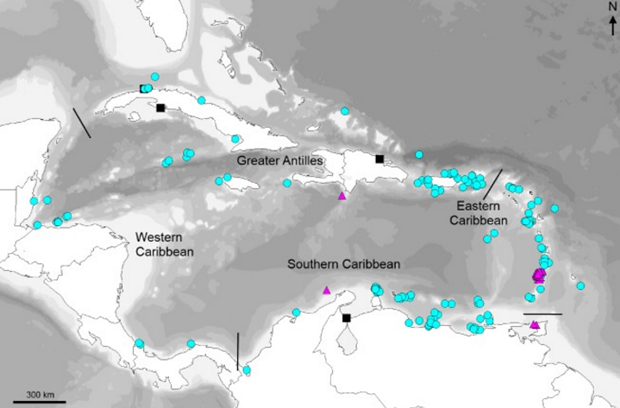