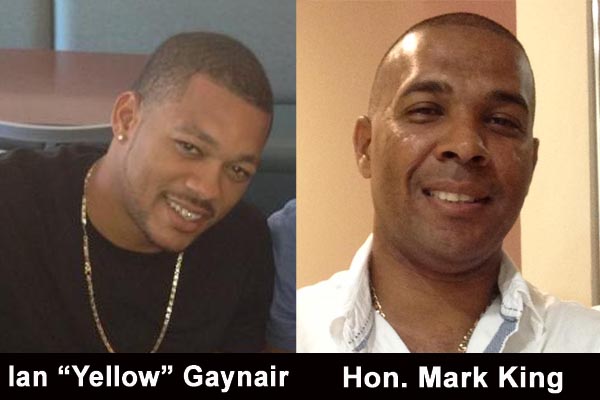 Lake Independence area representative, Hon. Mark King, Minister of State in the Ministry of Human Development, Social Transformation and Poverty Alleviation, in a press release issued today from his office, threatened KREM Radio with a lawsuit, claiming that the station’s newscast on Wednesday evening “slandered his reputation” by “suggesting that he had taken away land” from National Team football player Ian “Yellow” Gaynair.

Amandala has been reliably informed that a lease approval for a house lot had been issued to football superstar Gaynair; it allegedly had been abruptly cancelled.

The house lot was initially issued to Gaynair seven years ago in the Lake Independence area. We were informed that the cancellation occurred after he had invested thousands of dollars to fill and develop the lot.

Ian “Yellow” Gaynair is originally from the Lake Independence constituency in Southside Belize City; and he is only one out of a handful of young men in his neighborhood near Berger Field on Sarstoon Street who have been able to successfully persevere, despite the recurring incidences of crime and violence that have constantly plagued the Southside areas.

We understand that “Yellow” was one of about 20 deserving young men who were given lease approvals for lots in the extension areas of Lake Independence in and around 2006. At the time, those areas were mostly swamp and there were no streets in the immediate vicinity.

Gaynair received a lease approval for lot number 9236, which is now located on Holy Emmanuel Street in the area known as “Gungulung” in Lake Independence. We understand that Gaynair, who was 21 at the time, struggled to fill the swamp land and has invested as much as $4,000 in an attempt to develop the parcel.

It wasn’t until late June, when he went to renew his driver’s license, that he received the shocking news that the leased land was no longer registered in his name, but had instead been reportedly reissued to someone from one of the Northern districts.

Amandala understands that while Gaynair may have not paid property tax for the land for almost three of the 6 years in which he owned it, he did pay off all outstanding balances in 2008. At no point, however, had he been given either a written or a verbal notice that the lease on the land would be cancelled.

KREM News on Wednesday reportedly communicated with the present Lake I area representative Hon. Mark King, to find out why the lease was cancelled, but the station was directed to the Lands Department.

According to KREM News, they also tried to reach the Commissioner of Lands, but were told that he was out of office for the week.

A transcript of the newscast showed that KREM merely asked King “if it were not the case that area reps usually recommend whose leases are to be cancelled, and to whom they are given.”

A disgruntled King later sent out a release today, Thursday, that said “I express great concern of the allegations by KREM News yesterday evening, to suggest that I had taken away any land from our National Team football player Mr. Gaynair. The said parcel of land … was revoked by the Lands Department for non-payment of taxes, non-development and breach of lease.”

The release goes on to say that “…Such slandering of my reputation will not be tolerated … KREM News will now be held liable in the courts after legal consultation, unless a reversible public apology is made by this entity.”

The management of KREM said that nowhere in their newscast did they say that King took away the lot from Gaynair, and therefore do not know “what bee” is in King’s bonnet. They merely asked King, a politician paid with taxpayers’ money, a simple question, a question that he did not answer.