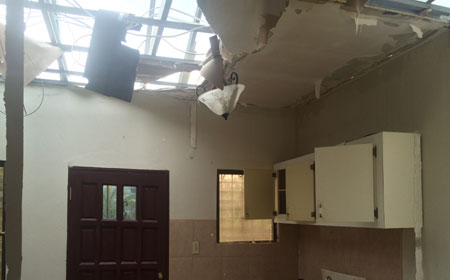 LADYVILLE, Belize District, Thurs. Aug. 4, 2016–Shortly before 8:00 o’clock on Wednesday night, the lights of Ladyville flickered twice before they died, leaving a thick shroud of darkness as the gusty winds of Hurricane Earl began to howl. The category 1 storm that had been churning in the Caribbean Sea for almost one week was now poised to strike Belize within a few short hours.

In the darkness, the silhouette of people carrying bags and other personal items was unmistakable as they made their way to the Ladyville Community Center which had been designated as a hurricane shelter by the National Emergency Management Organization (NEMO).

The hours appeared to be ticking away quickly, as hurricane force winds began to pound Ladyville.

Frightened cries for help began to dominate the airwaves as the entire country was on a hurricane vigil. Some villagers who were reluctant to leave their houses became trapped, as Earl’s powerful winds stripped some houses of their roofs, exposing the occupants to the raw, naked power of nature.

Rescuers worked in the dangerous conditions, trying to rescue everyone who had sent out a cry for help.

When daylight arrived, Hurricane Earl had not quite gone, but many who had had to leave their homes made their way back to see what, if anything, could be salvaged from some of their homes.

Some were not so lucky, like Ras Desho, on whose house Earl had put a large bukut tree to rest, destroying the house and most of its contents.

Some people who had to call out to be rescued because the water level had risen so dangerously high that they could not stay inside their homes, returned home and found everything soaked, and many household items destroyed.

One man and his common-law wife decided to stay in their concrete bungalow house, but ended up having to flee for their very lives when Earl lifted almost the entire roof and transported it somewhere else.

The man, who did not want to give his name for an interview, said he and his wife were lying in their $3,500 king-sized bed, feeling comfortable as they listened to the sounds of the wind on the roof. Then suddenly the sound of the wind stopped and the cold rain began to beat down on them.

“It was my wife who got out of the bed first and went to sit in the living room when the roof began to go,” the man said, as his landlord and a worker scraped the mud off his floor.

On Perez Road, uprooted trees blocked the passage of vehicles and pedestrians. Some residents were attempting to clear the road with their bare hands.

The clean-up was on in earnest on one side street; a backhoe struggled with a giant tree that Earl threw down in the middle of the street.

On the Philip Goldson Highway, in the vicinity of Mile 8 ½, about one foot of water spread out for about 200 feet, giving passing vehicles boat-like waves.

All around Ladyville, the evidence of Earl’s unwelcome visit was everywhere, but the resilience, determination and togetherness of the villagers were on full, harmonious display.