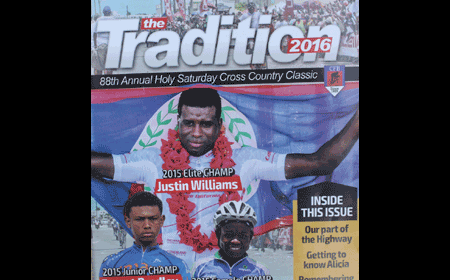 BELIZE CITY, Wed. Mar. 30, 2016–At the Court House Wharf on Holy Thursday evening, March 24, while waiting for the start of the annual pre-Cross Country parade of cyclists, advertising agent Eugene “Boca” Trench handed us a copy of the latest edition of the Belize Cycling Association’s magazine commemorating the historic Annual Holy Saturday Cross Country Classic, featuring the 2015 champions – Elite, Female and Junior, as well as all the teams participating in this year’s 88th Annual Holy Saturday Cross Country Classic, which was set to hit the pavement on Holy Saturday, March 26. In addition, there are special pieces on the late “Radio Belize Sportscaster, Manfred Denfield Atkins” and “former four-term President” of the cycling association, Gerald Garbutt, as well as Elston Wade’s article on the Miguel brothers that first appeared in the pre-Easter edition of Amandala, dated Sunday, March 20.

Boca apologized and explained to us that they tried hard to get the magazine out a month before Cross Country, but again there were difficulties in securing sponsorship until very late, causing the magazine to be completed just under a week before the ‘Country.

The magazine is a very nice package, with interesting and informative articles, and should indeed be a very handy guide to anyone looking forward to Cross Country, except that it only became available when the race was already upon us, and many people didn’t get a chance to secure their copy before the day of the race. Nevertheless, it is a beautiful souvenir, and, with the disappointing outcome for Belizean fans this year, it is still a worthwhile piece of Cross Country memorabilia to have, adorned with the face of the most recent Belizean champion on the front cover, and including a complete list of all champions from the race’s inception in 1928 until last year, 2015. Fans can pencil in the names of this year’s champions – Elite (Guatemalan Alejandro Padilla Miranda, 2nd Guatemalan Julio Padilla Miranda, and 3rd Belizean Joel Adan Borland); Female (Belize’s Kaya Cattouse, 2nd Alicia Thompson); and Junior (Belize’s Kaydine Pinelo, 2nd Brian Sutherland), to complete the champions list.

The magazine was printed by Norman’s Printing House, and is available at major outlets in Belize City. For sure, insisted Boca, a good response from the public would help the magazine to get off the ground earlier next year, well ahead of the next Cross Country.