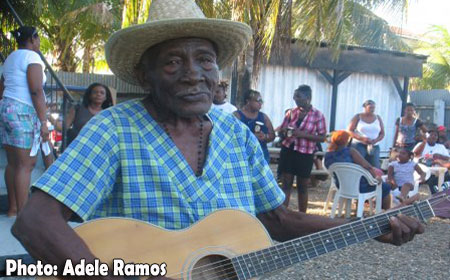 PUNTA GORDA–Paul Nabor, the iconic Garifuna parandero who passed away in Punta Gorda early last night at the age of 86, from complications due to his third stroke, will receive a formal send-off, according to a statement issued this evening by the National Institute of Culture and History (NICH), in the Ministry of Tourism, Culture and Civil Aviation.

“We see his death as a great loss to the arts in Belize. To his family, his extended family and friends, we extend our deepest sympathy,” the official statement said.

The family of David Lino, a grandson with whom Nabor resided in Punta Gorda, Toledo, until the time of his passing, told Amandala today that Nabor had suffered a stroke earlier this month, and since then his health had deteriorated, leading to labored breathing last night, shortly after 6:00. That was when he was taken to the Punta Gorda Hospital for treatment. At 6:50 p.m., Nabor passed away peacefully, his relatives told us.

Linda Barrow, the wife of Nabor’s grandson, told us that Nabor had just been released from the hospital on Monday, October 20.

“Mr. Nabor’s passing leaves a great void. He was an admirable role model worthy of emulation and not just his fellow Garinagu,” said a statement from the Christian Workers Union.

“Even in our sadness, we note Mr. Paul Nabor proved an exemplary and stalwart Belizean, worthy of the honors bestowed on him during his 86 years with us,” the CWU added.

We understand that official funeral arrangements will be finalized after Nabor’s only daughter, Monica, arrives in Belize from Los Angeles tomorrow.

NICH notes that Nabor brought the folk form of Paranda music to the forefront of Belizean and world music. Nabor’s music career is highly celebrated in Belize and on the world stage, and he appears on the world-acclaimed compilation, Wátina, along with another late Garifuna icon – Andy Palacio, who passed away in 2008. Nabor was a member of the Garifuna Collective, an ensemble of some of the best Garifuna musical talent put together by Stonetree Records.

The year before, Nabor starred in the 2007 documentary, Three Kings of Belize by Katia Paradis, with the late Wilfred Peters and Florencio Mess.

NICH notes, though, that, “He is best known for his song, ‘Naguya Nei’ – a song which he wrote in tribute to his sister who had passed away. She had asked to be remembered in song at her funeral. The song is well-known and loved by many Belizeans.

“In this same way, many other Garifuna musicians have taken up the mantle of writing and singing paranda music. It is a testament to his legacy.”

The BTB notes that back in 2004 and 2011, Nabor received honors for his contribution to culture and music at the Tribute to Belizean Patriots. First he received the Meritorious Service Award and later the Order of Distinction.

“In 2004, this international icon who was fluent in English, Spanish and Garifuna, was bestowed with the honorable title of Distinguished Guest, during a visit to Tegucigalpa, Honduras. While there for the release of fellow paranda musician, Aurelio Martinez’s Garifuna Soul album, Nabor received a signed proclamation from the officials in Honduras; an honor which further cemented his popularity, not only in Belize, but in the region,” the BTB further recalled.

When he visited us for KREM’s anniversary celebration back in 2009, Nabor told us that he started to sing at the age of 18. He said that he composed songs which he performed on his guitar. Relatives said that one of Nabor’s dying wishes was for him to be buried with his guitar, which he has had for his entire musical career.

Nabor, 81 at the time, told us that he had intended to quit performing, as he was quite satisfied with what he had accomplished over the six decades. He said he had no regrets, and he would take it easy and enjoy a more relaxing and traditional life of farming and fishing. He hated traveling to cold countries.

“If I can sit down and smoke my cigar, play my guitar, it’s better for me…I am not waiting for anything good; I am waiting for my death,” Nabor had told us.

His relatives told us that he had remained very active until he started getting sick in November and the end of December 2013 with serial strokes. However, they did not affect his ability to speak or move. The third stroke which he suffered recently hit him hard, and limited his ability to move around. Since last year, Nabor has also been battling hypertension.

Although he had said he would quit singing in 2009, Nabor did his last public performance last year (2013), just before the annual Garifuna Settlement Day celebrations on November 19th, his relatives told us.

Nabor had also expressed his desire for the youth to take up the baton: “I have to leave these for the young children. And who takes it up, it is good for them, because I have been eating my piece of bread from 18 years old, until right now…”

“You’re happy with the way the young generation is picking up the music?” we asked.

Nabor’s passion for music and life will never be forgotten.

“While we are saddened by the news of his passing, we join the rest of the country to recognize and celebrate Nabor’s achievements and contributions to Belize’s music industry. Usually seen with his guitar, Paul Nabor shared the Garifuna culture through his music and teachings of paranda,” the BTB statement said.

It added that, “The instrumental and percussion-based soulful music helps to export the Garifuna culture, and, by extension, promotes Belize to the rest of the world.”