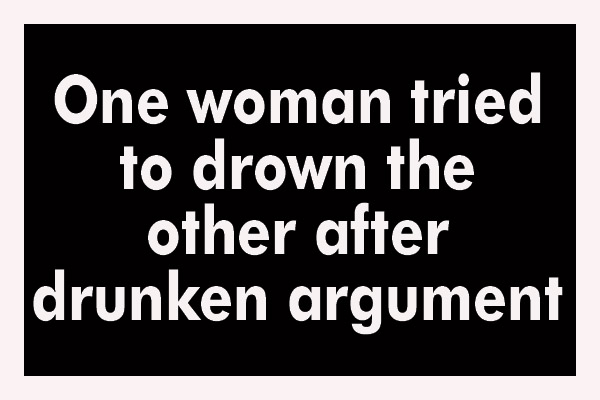 A woman has been released from police custody and will not face any charges for the attempted murder of her lesbian lover, whom she attempted to drown by holding her head down under water. The incident occurred at about 4:30 Saturday evening while the lovers were swimming in the sea in front of San Pedro Town.

The victim was rescued by a man who saw what was happening and rushed into the sea to save her from certain death. She was rushed to the San Pedro Polyclinic, where she was resuscitated, treated and later released.

Police said that the women were swimming in the sea in front of Cholos Resort in San Pedro Ambergris Caye when they became involved in an argument which escalated into a physical fight, during which one of the lovers held down the head of the other under the water and sat on her back to drown her.

A witness who saw what was happening became concerned because the victim was being held under the water for a prolonged period. He told police that he rushed into the water and pulled the victim out the water. He then took her to the shore, where CPR was performed.

Police said that the victim’s lesbian lover was taken to the San Pedro Police Station by a sailor of the Belize Coast Guard and a traffic officer. The woman was detained pending charges of attempted murder and aggravated assault, and would have been charged if the victim, after being discharged from the polyclinic, had pressed charges against her.

Police said, however, that when they went to the polyclinic, the victim had already been discharged. She was found and brought to the station, but after the women spoke briefly in the station, the victim announced that she would not press charges against her lover who had tried to murder her.

Police said that they had no choice but to release the woman from custody.

The women told police that they are both 21, and Belize City residents. They went to San Pedro to celebrate the one-year anniversary of their affair. They told the cops they were intoxicated when they began to quarrel and fight.