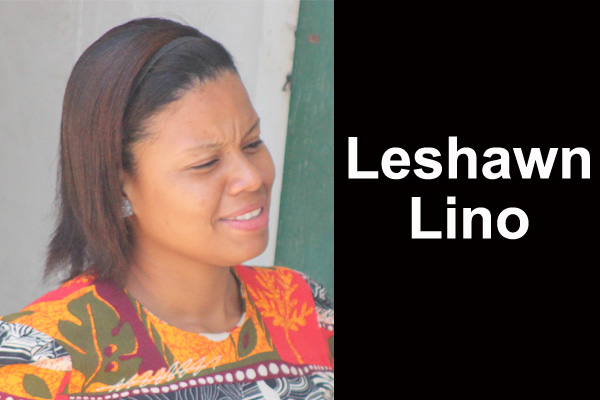 Lino was accused of stabbing Shamir “Metro” Henry, 23, in his neck in September, 2010

Leshawn Lino, 26, a mother of three, was acquitted last night after a jury of nine found her not guilty of manslaughter in a ratio of 8 to1.

Lino was accused of stabbing Shamir “Metro” Henry, 23, in his throat on September 2, 2011, causing him to bleed to death after he collapsed on the street. The incident occurred on Cahal Pech Street in the Belize Defence Force Housing site in Lords Bank Village.

Reports are that Henry went to visit Lino, the mother of his child, at her house sometime after 7:00 that night. The house is located a short distance from the street, so Lino had to walk out to Henry, a distance of about 25 yards.

A few minutes later, Lino was seen running toward her house, screaming for someone to call the police. Henry was then observed lying on the ground, apparently dead from a wound to his neck.

During the trial, which started last week Wednesday, May 8, Henry’s mother, Rose Henry, testified that when she arrived at the scene, she saw her son lying on the ground, apparently dead. She said that Lino then ran to her saying, “Ah neva mean it, ah neva mean it, Ms. Rose.”

Allan Braddick also testified that he was at the house that night, visiting Lino’s sister, when the incident occurred. He testified that after he heard some noise from the area where Lino and Henry were, he saw Lino running toward the house, shouting for someone to call the police. He testified that when he saw Henry’s body on the ground, he asked Lino what had happened and she replied “He mi di beat me so ah stab him.”

Other witnesses included the scenes of crime technician and the analyst from the National Forensic Science Service, the arresting officer and the female police sergeant who took Lino to be examined by a doctor the night she was detained after she complained of suffering from pain.

That doctor, Dr. Punjabi, after examining Lino, observed that she had minor swelling and bruises to her head and face.

On Monday, May 13, the Crown, represented by Kaysha Grant, closed its case and that was when Lino’s attorney, Bryan Neal, made a no-case submission to the court.

However, Justice Adolph Lucas, Sr., after hearing the arguments presented by the lawyers on Monday, decided that Lino indeed had a prima facie case for which to answer, when court resumed on Tuesday.

Neal then had his client give a dock statement in which she told the court “On September 2, 2010 about 7:00 p.m., I was at home with my children and my son in my lap, when my daughter came and told me Shamir wanted to see me…. I thought he had come to wish me happy birthday, since my birthday was the next day…. When I got in front of him, instead of greeting me with “happy birthday” and a hug, he pulled me in my hair and started punching me on the left side of my face and temple…I got kicked in my stomach and punched in my chest and I went down. When I looked up, I saw him with a knife and that’s when he pulled me up and we started struggling…. I ran away from him and I kept running…. I asked them to call the police because I thought he was coming toward me to continue what he had started – beating me…. That is when I was detained and taken to the police station in Ladyville and that’s where I spent my birthday also.”

Closing arguments were heard today, after which the case was summed up to the jury by the judge. The jury then retired to the deliberation room at 5:04 p.m. and returned to the court room at 7:32 p.m. When asked if they reached a unanimous decision, the jury forelady replied no. It was revealed to the court that they had reached a “not guilty” decision, but at a ratio of 8 to 1.

After the verdict was given, Justice Lucas instructed Lino to “leave that box now.” Lino didn’t need to be told twice, and she was rushed out of the court into a waiting vehicle, a free woman.